Nathan Buckley was warned against taking on the Collingwood coaching job. A veritable Greek chorus of AFL naysayers from past Magpie greats, coaches, friends, football bosses and mentors warned the champion footballer that to achieve the ultimate success at his beloved club, he needed to try his hand elsewhere.

But for Buckley, who had spent his well-travelled and prodigious sporting childhood and teenage years playing football across the continent and began his AFL career at Brisbane, Collingwood was the only answer. “This,” he said, sitting alongside Mick Malthouse, Eddie McGuire and Gary Pert, “is where I want to be.” 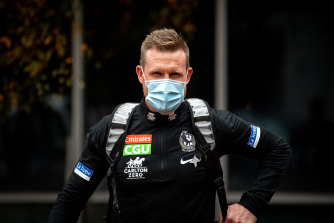 Nathan Buckley leaves the club after announcing his departure as coach.Credit:Eddie Jim

That was 2009. Buckley had suitors across the country. He had rejected Richmond outright and, after more meaningful negotiating, North Melbourne. But he chose the coaching succession plan that began in 2010 with a Malthouse premiership, moved into acrimony over 2011 and 2012 and will ultimately finish on Queen’s Birthday. Buckley met his footy boss Graham Wright on Monday, sensed the inevitable and accepted his fate.

Mid-season coaching departures never reflect well on football clubs but Buckley’s gracious performance on Wednesday painted all parties in the best possible light despite Collingwood’s undeniable internal mess. Had he been told at the start of his coaching career he would not achieve a flag he said he would have been absolutely gutted but he was more philosophical now and only disappointed.

Just as Buckley – who played 260 games for Collingwood including two grand finals and won a Brownlow, a Norm Smith and a record six Copelands – learnt to appreciate the playing journey despite no premiership, he observed how similarly his coaching career of 218 games mirrored his playing career.

The Malthouse-Buckley handover remains one of football’s great cautionary tales. Back in 2009 McGuire likened its doubters to those doubted the Kennedy space project, but there is no question it cost Collingwood some success. Had Buckley not taken the advice of his Collingwood bosses and his manager Craig Kelly his story might well be different, but he did come agonisingly close.

His supporters will say Malthouse’s lingering influence haunted Buckley’s first two years as coach and cost both him and the club success. Malthouse supporters believe the older man and his strong bond with the players – one of the youngest lists in the AFL in 2011 – would have resulted in the club achieving at least one more flag had he not been removed.

It is a credit to both Buckley and the club that he was given another chance and a new deal before season 2018 after four years in the wilderness. The poignant vision of Buckley telling his players in the rooms after the Dom Sheed goal that he did not know how to lead them will endure as a moment in time portraying the thin line between success and failure but also of a reconstructed man and communicator.

But only two years later Buckley became a casualty of the ongoing mess at Collingwood, of the mishandled salary cap and then of the team’s poor performances this year. He also represents the football reality that a decade without a flag for a coach tends to be the breaking point. Certainly relationships he built with the players that seemed so strong after he survived the review of 2017 have been less so over the past 12 months.

Last year’s finals win over West Coast was a high point in a dismal year on and off the field in which Buckley found himself the centre of a serious COVID-19 misdemeanour and culminating in the football fire sale that was not his fault but did not reflect well on him. The revolving door of football bosses that has punctuated his time as coach also continued.

And Buckley was still licking his Adam Treloar wounds when the Do Better report landed and Eddie McGuire stepped down. The inevitability of what took place this week seemed fated from the moment Buckley stepped into the final season of his contract with a divided board, dismantled list and not the support of the players he once had.

It might seem unedifying to throw grubby football club politics into the mix of Buckley’s otherwise dignified Collingwood farewell, but it is very much a part of the story and of Buckley’s unsuccessful final season.

It can be no coincidence that Buckley’s departure came in the same week that the old enemy Carlton cast doubt on the future of senior coach David Teague when it revealed a full scale football review.

The underperforming Blues have their cultural problems but at least have a board succession in place and an infinitely more promising list. If Alastair Clarkson is the target for both clubs then the race is on.

Clarkson in turn could have been speaking about Buckley when he cautioned his former captain and now assistant coach Sam Mitchell against leaping into senior coaching and referred to great players who failed as coaches due to lack of experience.

Not that Buckley’s time can be deemed a failure. Unlike James Hird and Michael Voss, he did at least serve the briefest of apprenticeships under Malthouse and will end his nine and a half seasons with a positive win-loss record, five finals appearances, three top fours and that heart-breaking grand final in 2018. As Buckley himself said, his coaching career in that sense mirrored his playing fortunes.

Collingwood seem intent this time upon an experienced senior coach and even setting aside contracted premiership mentors Damien Hardwick, Chris Scott, John Longmire and Adam Simpson there is Don Pyke who has returned to coaching at Sydney, Brad Scott at the game’s head office and Ross Lyon working outside of football and in the media.

Should the club – despite its significant divisions – manage to lure a big coaching scalp, that would shore up the position of the Korda board, which is standing firm against the Jeff Browne challenge and looks determined to drag the battle on as long as it needs to.

Against that any club that moves on its coach mid-season is a club in some sort of turmoil. If the timing of Buckley’s departure was triggered by the civil war at the club and he has become a political pawn then it is ironic that the decision came just days after he backed the current board – a backing he reinforced on Wednesday. Certainly, the thinking changed in recent days and Buckley’s use-by date was brought forward.

But the end was always coming. New football boss Wright and Magpie bosses appear to have reached that conclusion after some weeks of soul-searching and extensive conversations with the players. And if there was disenchantment, resentment or frustration in Buckley’s demeanour in recent months there were few signs of that when he faced the media.

When asked what brought about his end, Buckley said it was the “cycle of life”. He was always going to get tapped at some point, he said, and nothing lasts forever.

But the ultimate football success eluded him at the Magpies and for Buckley the lingering question beneath the surface of his glorious career is whether he could have rewritten his own story. And whether the end might have been different had he searched even for a short time for success anywhere but Collingwood.