WILLIAMS SUCCUMBS TO THE PRESSURE

At the 20-minute mark of the first quarter, Bulldogs defender Bailey Williams found himself under huge pressure from Kysaiah Pickett and coughed it up straight to Luke Jackson. The Rising Star winner then handballed it to Spargo who kicked the easy goal from 10 metres out. Moments later Williams dropped a mark which allowed Bayley Fritsch to pounce and put the Demons up by 19 points. 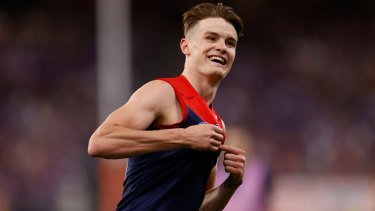 Bayley Fritsch celebrates his fifth of six goals on the biggest stage of them all.Credit:AFL Photos

The Bulldogs desperately needed a spark after being outplayed in the first quarter, and their boom recruit Adam Treloar stood up to kick the first two goals of the second term and cut the deficit to 10 points. The former Magpie set the tone for the Dogs who fought back from 21 points at the first change to lead by eight at half-time.

BONTEMPELLI RISES TO THE CHALLENGE

After a very quiet first quarter (four disposals), Bulldogs skipper Marcus Bontempelli led from the front in the second term with nine touches and two goals, both coming from pack marks, to help Treloar inspire the Dogs’ dramatic first-half turnaround.

After the Bulldogs looked like they were going to run away with the contest when they shot out to a 19-point lead in the third quarter, Fritsch booted a quick couple of goals to turn the tide and spark a jaw-dropping Melbourne barrage which included 12 consecutive goals – one of which was a sensational checkside dribbler from Christian Petracca – to put the Demons up by 55 points in the final term. At that stage, it was game over. 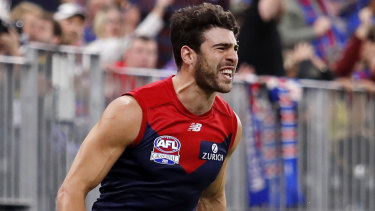