Snap Shot is a weekly column taking a look at the lighter side of football.

It doesn’t matter at what level football is played, mistakes happen on and off the ground.

And anyone involved in the game has found themselves leaving a stint volunteering in the timekeeper’s box not 100 per cent sure if they caught every signal from the umpires to ensure the siren rang exactly when it should. 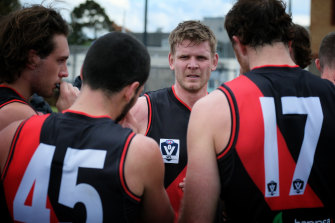 Essendon’s VFL team was made to earn the points against Southport.Credit:Luis Enrique Ascui

So, although the incident was taken as seriously as it needed to be at an administration level, Snap Shot could not help but laugh when finding out that Essendon’s VFL team was forced to hang on and hang on and hang on to record a two-point victory over Southport on the Gold Coast on the same weekend Collingwood’s Jamie Elliott broke Bomber hearts with a goal after the siren at the MCG.

After conceding the first five goals of the game, the Bombers clawed their way back to hit the front for the first time when Patrick Voss goaled as they entered time-on in the last quarter. They kicked the next two goals to open up a 16-point lead just after the 26-minute mark that virtually assured victory.

Given the first three quarters had lasted less than 30 minutes each, the Dons suspected they would only have to hang on for about four minutes to win the match.

The only problem was that the clock kept ticking, and the siren stayed quiet as the quarter stretched past 38 minutes and Southport – who had only lost two games for the season and never at home in the VFL – kicked two goals to draw back within two points.

Finally, as people began asking the commentators how long was left and players looked as though they were going to collapse in the mud at Fankhauser Reserve, the siren blew at the 38 minute and 45 second mark and the Bombers’ VFL team recorded its fifth win of the year.

Essendon had not been able to provide a timekeeper due to a last-minute COVID-19 hiccup, so they weren’t sure what happened. But a VFL investigation found the quarter went at least three minutes longer than it should have.

There was nothing sinister about the error, just a mistake that while not ideal at the level is unlikely to be repeated. Clubs have been reminded to provide a timekeeper and make sure those on the post know exactly what is required. 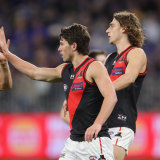 Archie Perkins was among the Bombers who played out a long last quarter in SouthportCredit:Getty

Officials agreed it was fortunate Essendon won because, apart from two late goals to Southport, who still sit second after losing to Collingwood on Saturday, no real damage was done to the overall standing of teams.

Otherwise, the VFL might have had another “sirengate” on their hands.

The Bombers also won both their follow-up games on the weekend against North Melbourne with Jye Menzie, Archie Perkins, Massimo D’Ambrosio and James Stewart playing in the AFL a week after being a part of the never-ending quarter.

A fierce battle for ninth

The battle for ninth has been on all season and it really started to heat up in round 20 when Richmond reclaimed the position – which their supporters hate being raised – after avoiding it for four rounds with some strategic losses in the previous three.

But the comeback win over the Lions had Tigers celebrating their return to ninth as they engage in a three-way battle for the spot with the Western Bulldogs and St Kilda. 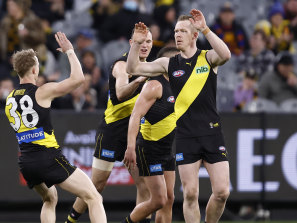 Richmond are in a fierce battle with the Western Bulldogs and St Kilda for ninth.Credit:Getty

In 2022, those three teams have sat in ninth spot after 14 of the 19 rounds of football played so far this season. Collingwood toyed with the position for three rounds before burning it off with their winning streak, while Hawthorn and Gold Coast also sat in the position once each in the first six rounds.

Since the top-eight system was introduced, every team bar Brisbane, Gold Coast, the Giants and Sydney have finished in the spot most see as no-man’s land. Carlton only finished there once, in 2013 – when they entered the finals after Essendon was banned while Richmond, despite their reputation, has been there five times but not since 2008.

Melbourne have made the best use of the spot, finishing ninth in 2020 before winning the flag last year and ninth in 2017 before reaching the 2018 preliminary final.

Footy at the Commonwealth Games

Just as a reminder of the progress the game has made in 40 years, Snap Shot recalls that Carlton played Richmond in an exhibition match at the 1982 Commonwealth Games in Brisbane, just 11 days after they played each other in the grand final.

Asked to recall the match, Blues coach David Parkin revealed his competitive instincts had not dimmed and then offered an honest explanation for the result. 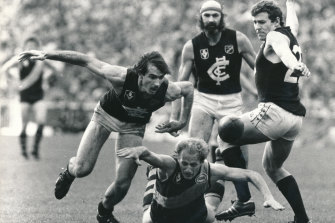 Richmond’s Robert Wiley was under extreme pressure as Carlton’s Ken Hunter lunged for the ball, backed up by Des English and Bruce Doull, in the 1982 grand final.Credit:The Age Archives

“I don’t want to remember it because we got done. We had been celebrating more solidly than Richmond, who had probably been drowning their sorrows,” Parkin said.

We guess Brian Taylor would have been rapt to play in the exhibition match given he was controversially left out of the grand final having kicked 71 goals in the home and away season. A knee injury suffered mid-season had hampered him upon his return.

Parkin remains none the wiser as to how the club was convinced to play the game.

“They did some pretty stupid things in those days, so that was just another one of them,” he said.