So where was rugby before it was so rudely interrupted?

I remember. It was in the last burst of the Bledisloe in 1994, and the Wallabies were about to play the All Blacks at Eden Park. In the hour or two before kick-off, the injured John Eales was on duty as one of the "dirt trackers", flogging souvenir Wallabies T-shirts in the car park. The money raised would be added to the tour fund to be divided equally between players after the final Test, which would add a few hundred dollars to the $50 a day they were each earning on tour. 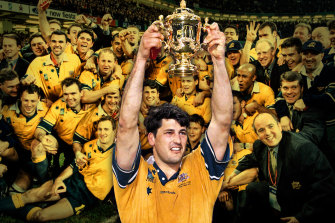 At that time, all the Wallabies had their own jobs – some with serious careers in business, law, engineering, dentistry – and the primary motivation for playing was personal pride, for national honour.

Beyond their playing commitments, each Wallaby understood that beyond playing they were expected to give back to the rugby community, to speak at end-of-season dinners for free, do kids training sessions, turn up at whatever rugby functions were happening and generally beat the rugby drum. The idea that they were not just players but ambassadors for the game was not only taken seriously, but cherished by the players.

And then it all changed with stunning rapidity.

Just over a year after flogging T-shirts for $20 – and Kiwi bucks at that – Eales signed a contract for a reputed $500,000 a year, when rugby went professional, and the game changed forever. 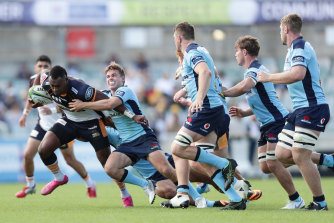 Tevita Kuridrani of the Brumbies is tackled by NSW playmaker Will Harrison during round seven of Super Rugby, just before the season was suspended.Credit:Getty

Who was there? Nick Farr-Jones and Tim Gavin, two Wallabies of the old days, still turning up to beat the rugby drum all those years on, for no reward.

Rod Kafer is right in saying Australian rugby has been sick for many years, and we all know that. I disagree strongly, however, in attributing the slide to any person in particular or even a few people. Mostly the people you see at the top level are seriously good rugby folk – and I am thinking particularly at board and chair level – doing their absolute best for the game, with their only reward being endless headaches and bitter public criticism as everyone rips in. What ails the game in this country is not due to particular people making wrong decisions. The way back to rude rugby good health will not be an easy one.

The coronavirus pause, however, is going to allow a massive reset of the game in this country. It's a time to recognise what has gone wrong and how we can come together as rugby people of good will to fix it, make it better.

I say the starting point is we need to get back to the old values as much as possible, make players understand they owe the game far more than the game will ever owe them. Got that, you blokes?

While it is one thing for you to make a good living from it, if you don’t have a sense of privilege in wearing the jersey, you needn’t bother putting the boots on in the first place, and good luck in rugby league, or France, or wherever.

In the new age to come, we must build slowly. Cutting back players' salaries to rather more humble levels will be easy – the new cake to split up is going to be a lot smaller anyway.

But let us also look at what professional rugby can learn from the amateurs. Before the plague, it was the amateur game that flourished as people flocked back to the club matches, with beer and sausages on the hill on a Saturday afternoon to watch the local team go round.

Why, because they felt a connection to them. The new professional game must prize that connection most of all. A rough ride is ahead.

But on the other side, at least we know our starting point will be populated only by the true believers. And this will be the sweetest victory of all.