North Melbourne offered a slide of draft picks in the late rounds next year in an ambit opening bid for Richmond’s ruck forward Callum Coleman-Jones.

On the first day of trade period, North made an initial offer of their third round pick next year for Coleman-Jones, but they want Richmond’s fourth round pick back as well as part of the deal for the player.

The offer leaves the Tigers and North a long way apart in early discussions as Richmond want the Roos’ second round pick, selection 20, for the big man, who has been offered a four-year deal to move to Arden Street. Coleman-Jones was drafted with pick 20 four years ago. 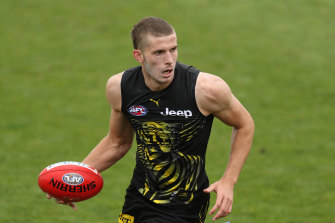 On the move: Callum Coleman-Jones. Credit:Getty

Richmond was frustrated and disappointed at the player’s decision to leave in the first instance believing opportunities would begin to open up in the Tigers’ senior team next season and beyond.

They also feel Coleman-Jones had been well-supported by the club after his COVID-19 breach at a Gold Coast strip joint and then a fight outside a kebab shop, along with teammate Sydney Stack, last year, which cost the club $100,000 in the salary cap and saw the players suspended at length.

North holds the first pick in the pre-season draft, but it is unlikely the player or his management is keen to use this avenue to move.

North reasons the 22-year-old has only played nine games since being drafted to Richmond in 2017 and so while he was taken with an early selection he has seldom been used.

Coleman-Jones has spent most of his time as a back-up forward to premiership stars Tom Lynch and Jack Riewoldt during a successful period for the Tigers.

The 200-centimetre athletic tall played most of his junior football in the ruck and wants to play more as a ruckman than a forward.

North brought in versatile athletic ruck forward Jye Edwards in the mid-season draft as support for both Nick Larkey and the veteran ruckman Todd Goldstein.

Richmond has already lost versatile tall Mabior Chol this off-season, with the ruck forward moving to the Gold Coast Suns as a free agent.

The Suns were in close negotiations with Coleman-Jones before securing Chol as a free agent.