Australian rugby's top earners have volunteered to take pay cuts of more than 65 per cent to protect their lower-paid teammates while the game rides out the coronavirus shutdown.

As World Rugby's coronavirus working group prepared to finalise a loan facility worth between $100 million and $200m for the game's tier-one unions, senior Wallabies Michael Hooper, Matt Toomua and Dane Haylett-Petty spearheaded the push for the country's highest-paid players to shoulder the lion's share of cuts. 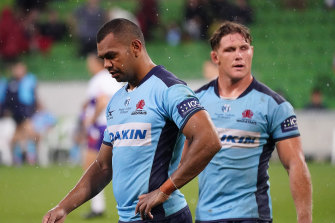 Kurtley Beale and Michael Hooper will cop a huge pay cut as part of the players’ deal with Rugby Australia.Credit:AAP

Should the plan receive the support of the players, it means Hooper, Kurtley Beale, Taniela Tupou, Izack Rodda, Allan Alaalatoa, Marika Koroibete, Toomua and Haylett-Petty will approve a pay deal that will hit them hardest.

There was no deal or overall number agreed at close of business on Wednesday as negotiations dragged into a third week and the Waratahs were forced to pay their roster in full, the second Super Rugby side to do so.

But sources told the Herald the average percentage cut across the group of 192 contracted players in Super Rugby and the sevens programs was shaping as 65 per cent for six months, distributed using a tiered model.

The highest earners – including Test captain Hooper on close to $1.2 million a season and Tupou, on a deal scaling up to $1 million in his final year – will take cuts much higher than that, allowing players on base contracts in both formats to be buffeted from the worst of the pain.

There were still several concerns among the players, including how the cuts would affect Pacific Islander and South African players who were on visas and would not be eligible for the federal government's JobKeeper subsidies.

The men's and women's sevens programs were also a flashpoint, with both squads off contract in August, a timeline that lined up with the conclusion of their 2020 Tokyo Olympics campaigns.

The Rugby Union Players Association was seeking reassurance on the status of those players after August but had not received any, sources close to the negotiations told the Herald.

The gesture from senior players was also not enough to stem widespread "market-testing" among Australian players of all ages, salaries and experience levels. At least two agents reported a massive spike in players asking them to canvass overseas options as the pay deal uncertainty dragged on.

The absence of a broadcast deal beyond the end of this year was a source of great anxiety, leaving RA unable to make any guarantees that players' contracts would be honoured beyond the emergency deal to cover the next six months.

The picture was expected to become clearer towards the end of the week as World Rugby's coronavirus working group prepared for a crucial meeting on Wednesday night.

The final few unions were expected to brief the group on their financial outlook, while World Rugby's representatives were hoping to be able to paint a clear vision of what the game's cash reserves would allow in the way of assistance.

Despite comments on Tuesday from World Rugby vice-chairman Agustin Pichot that the governing body could not afford to bail out the major southern hemisphere unions, sources told the Herald the organisation was close to finalising a short-term loan arrangement worth up to $200 million or more.

But it would be a crucial part of an overall emergency package, combined with the player pay deal, RA's own executive pay cuts and widespread stand-downs at head office and at all the Super Rugby clubs.