Melbourne champion Garry Lyon says there is a “tragic” element to the fact the Dees could break their 57-year premiership drought on Saturday night in Perth rather than at the MCG.

Lyon will present the premiership cup to Dees skipper Max Gawn and coach Simon Goodwin if Melbourne salute against the Western Bulldogs at Optus Stadium. 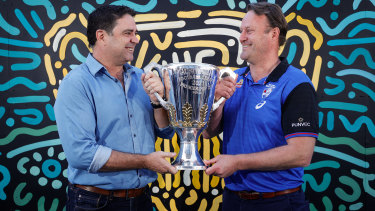 Bulldogs great Chris Grant will have the honour of handing over the silverware should his club prevail.

Lyon said he would not have any media commitments during the match, leaving him to watch the game like any other fan.

“I’ll be a rusted-on nuffie Melbourne supporter for the game, no doubt about it. There won’t be anything dispassionate about Saturday,” Lyon said in Perth on Tuesday.

He added that he felt for the Dees supporters stuck in lockdown in Victoria and appreciated the chance to represent the faithful.

“All Melbourne supporters are the same …90 per cent of them are at home in Melbourne or around the country rather than here. And that’s the ironical thing about it. Tragic in terms of Melbourne supporters’ story to it all, and that’s what makes me sadder and makes me appreciate the fact that I am here more than anything,” Lyon said.

“It’s a sombre reality isn’t it. There were sort of macabre jokes going around early in the year when Melbourne got on a roll that it would just be our luck that COVID would hit and the game wouldn’t be here, and of course, here we are … [the] preliminary final should have been at the MCG, MCC Members’ [reserve] heaving and all those Melbourne supporters who have done it pretty hard celebrating.

“That’s the way it is. If you gave them the choice of no grand final and the situation that’s gone through, they’d be over the moon that their team’s in a grand final and they’re going to get to watch it just with their immediate family. It’s cruel.”

Lyon said this was the best chance the Demons have had to win the flag since their last premiership in 1964.

“They’re playing the best footy I’ve seen from a Melbourne [side]. No doubt about that.”

Grant, who also works as the Dogs’ head of football, said it was a privilege to be chosen as a potential cup presenter.

“It’s such an amazing and surreal experience to have the colours of your club involved in grand final day. It’s a very, very different feeling than any other final for a lot of different reasons,” Grant said.

He said there was a redeeming element to the fact at least some Demons and Bulldogs members would attend the match.

“I’m sure the members back home, as disappointing as it is, to not be able to access the MCG to watch it, both clubs have got 12,000 of their members that are going to be at Optus Stadium on Saturday night.”

The AFL meanwhile announced on Tuesday that Matt Stevic, Jacob Mollison and Brett Rosebury would be the field umpires for the grand final.