Home » Rugby » Two-year ban to a month: Naden could be first athlete in world to use new WADA code

Brent Naden could be the first athlete in the world to benefit from a looming change to the WADA Code that can reduce the sanctions for recreational drugs like cocaine from a two-year ban to as little as one month, anti-doping experts believe.

The expert views came as it emerged the Penrith Panthers centre, who returned a positive test to metabolites of cocaine on the day of the NRL grand final, engaged the NRL's go-to lawyer Ramy Qutami to help him navigate his potentially complex case.

Under current WADA guidelines, Naden could have spent at least two years out of the game for the rules violation. 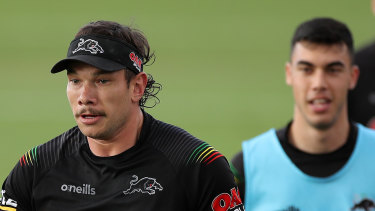 Brent Naden has returned a positive A-sample to metabolites of cocaine after the NRL grand final.Credit:Getty

Now, that could be reduced to as little as a month thanks to a substantial pivot from WADA, the World Anti-Doping Authority, that seeks to recognise 'substances of abuse' that can be consumed out-of-competition and are unrelated to enhanced performance.

The new code will come into force on January 1 and although he may not feel like it at the moment, the 24-year-old could be one of the luckiest athletes on the planet given the timing of the offence and the impending update to the WADA Code, the first such major amendment in six years.

Even if the test was returned in-competition, as will be the case for Naden given it was taken after the grand final on October 25, a three-month sanction will apply if the athlete can prove the use was out-of-competition in a social context and not intended to give them an advantage on the field of play.

Should Naden agree to take part in a treatment program approved by either the NRL or Sport Integrity Australia, the ban could even be reduced to one month.

"If the athlete can establish that any ingestion or use occurred out of competition and was unrelated to sport performance, then the period of ineligibility shall be three months," WADA's new code states.

"In addition, the period of ineligibility may be reduced to one month if the athlete or other person satisfactorily completes a substance of abuse treatment program approved by the Anti-Doping Organization."

Given Naden's violation occurred under the current, more stringent WADA rules, the question is why his case would be treated under the new Code, even if it is heard in front of the NRL anti-doping tribunal next year, which looks to be the likely timeline.

The answer lies in a principle that has been tested multiple times before the Court of Arbitration for Sport (CAS) that will see an athlete given the lesser of two penalties should the laws change during the period it takes for the matter to appear before the relevant anti-doping panel.

"Technically, the 2021 Code only comes into play as of 1 January 2021," said Professor Jack Anderson, an expert in sports law at the University of Melbourne. "Strictly speaking, this means that any anti-doping rule violation case which is pending should be governed by the anti-doping rules in effect at the time the alleged rule violation occurred.

"However, under the new 2021 Code, the anti-doping panel would have the flexibility to hear the case under the 2021 Code by way of what the Code calls the principle of lex mitior… if the law relevant to the offence has been amended, the less severe law should be applied. This approach has been upheld many times at CAS.

"Given all of the above… and given the difference in severity between the old code and the new… he will be dealt with under the more flexible terms of the 2021 Code."

A one-month ban would be an extraordinary result for Naden given the far harsher sanction he would have faced should the alleged violation had taken place even weeks earlier. If he had faced the NRL anti-doping tribunal this year, he would have had almost no wiggle room when it comes to his time out of the sport.

But another anti-doping and sports integrity expert, Catherine Ordway from the University of Melbourne, said it may not be quite so cut and dry and the NRL panel could still take a firmer stance on Naden. Any finding from that panel can be appealed by Sport Integrity Australia should they be unsatisfied with the sanction.

"The legal position is the tribunal would be expected to take into the account those changes that have been made. So how they do that is another matter. They will be trying, I imagine, particularly if there is some evidence he has any sort of addiction, to bend over backwards to be as flexible as possible," Ordway said.

"You could also get a tribunal that says nope, hardline, you are under the 2020 code, you were aware of that code, you’re a role model and take a harder line. He’s rolling the dice in that sense."

Naden has followed the lead of some of the rugby league’s biggest names including Jarryd Hayne, Dylan Walker, Bronson Xerri, Trent Barrett and Shane Flanagan, in engaging Qutami.

Qutami, who has over 25 years of legal experience, has previously represented other high-profile clients including Israel Folau and Salim Mehajer.

On Thursday, Qutami was in court Wollongong Local Court to defend Tristan Sailor after the former Dragons player was charged with aggravated sexual assault. At the bail application hearing, Sailor was granted a bail variation to report to police three times a week instead of five.