Broncos fullback Tamika Upton scored a stunning hat-trick in an opening round win over the Warriors to stake her side's claim of a third successive NRLW championship.

The 23-year-old Upton scored three first half tries in a 28-14 win in Canberra that gave Brisbane every reason to be confident of winning the four-team series once more. 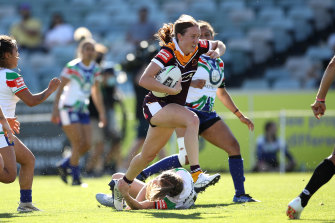 Brisbane’s Tamika Upton breaks the Warriors defensive line for one of her three tries on Saturday.Credit:Getty

The champions eventually woke from their slumber midway through the first half when Upton sparked their attack. A piercing run through the middle left two Warriors' markers in her wake as she crossed for Brisbane's first try of the season.

Two minutes later, Upton had Brisbane in the lead. Quick hands through the middle exposed space for Upton to cross under the posts, giving the Broncos a 12-8 lead.

With a minute left in the first half, Upton completed her hat-trick. Using her blistering speed to squeeze between two markers, Upton sliced through the Warriors' line from close range to extend the lead to eight at the break.

The momentum Brisbane finished the half with continued after the restart as their quick backs made light work of the Warriors' line defence. Centre Julia Robinson pounced on space down the left to score early in the second half.

Their fifth try was more rudimentary. Chelsea Lenarduzzi used her strength to barge over the try beside the post, allowing Meg Ward to slot her fourth conversion of the afternoon to make it 28-8.

Despite being put to the sword, the Warriors refused to surrender and pulled one back through Pelite who scored on her club debut. However, that was as close as the Warriors got to an upset.