Richmond defender Nick Vlastuin is adamant he touched Jack Sinclair's kick before it went through the goals on Friday night, while the AFL has no problem with how the ARC dealt with the controversial decision.

Sinclair's kick – in the second quarter of St Kilda's semi-final loss to Richmond – was adjudged by the goal umpire to have been touched by Vlastuin before it went through the goals. 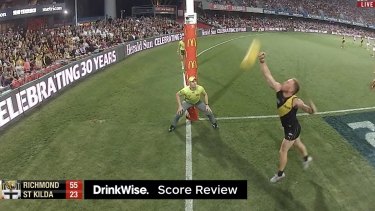 The decision was sent for a review, and some angles seemed to show clear light between the ball and Vlastuin's fist.

But sources with knowledge of the situation said the AFL had no problem with the ARC reviewer's call, who had decided there was insufficient evidence to overturn the on field decision.

The evidence to overturn such a decision needs to be "conclusive" and both the reviewer and the AFL were not convinced this was the case.

Privately, following the game, the Tigers were adamant that Vlastuin had touched the ball and that was confirmed publicly on Saturday morning when the defender posted to Twitter.

"When you know you touched the ball, the goal umpire thinks so too, but someone watching from the stands calls you a cheat, what is that?" he wrote.

There was some suggestion on the commentary that Vlastuin did not indicate he had touched the ball, however he did as the field umpire ran into deliberate with the goal umpire.

The Saints had periods of dominance in the game but could not take their chances, and therefore were never close enough on the scoreboard to scare the Tigers.

“Does it matter?” Saints coach Brett Ratten said when asked about the ARC decision.

“Can they replay it and go out there and finish off the game? They’re not doing that.

“They are not changing the decision.

“We couldn’t kick 'em from the goal square let alone get a little assistance from the software."