Michael Voss remains favourite to be named Carlton’s new coach within days, but his only competitor Adam Kingsley is still in the running for the position.

Voss, the former Brisbane Lions coach and Port Adelaide assistant, and Kingsley, a senior assistant coach at Richmond, gave their final presentations to the Blues’ coach selection subcommittee on Wednesday, after Voss flew to Melbourne. 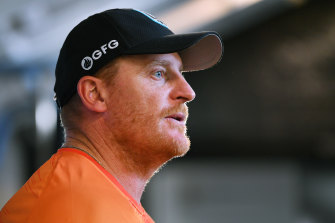 The subcommittee, including new chief executive Brian Cook, three-time Blues premiership coach David Parkin and champion player and new football director Greg Williams, have been impressed with both candidates, who agree the playing list is in strong shape and rapid progress can be made. Voss was bullish about Carlton’s short-term prospects.

Club sources said that was also Cook’s view after a detailed analysis of the list.

Should Voss win the position, sources said he would be given a three-year contract to coach the underperforming Blues.

President Luke Sayers, who has driven Carlton’s ruthless decisions to jettison David Teague and CEO Cain Liddle, has also become involved in the final stage of the coach-appointment process.

Cook, the former West Coast and Geelong chief, is set to have the biggest say in the appointment, having appointed Mark Thompson and Chris Scott to the top positions at Geelong in recent decades.

Cook, who spoke to staff on Tuesday, has a five-year vision for the Blues to again be a consistent power.

Voss, a three-time premiership captain with Brisbane, coached the Lions in 109 matches from 2009 until 2013, leading the team to a 43-65-1 win-loss-draw record before he was sacked.

The Power say Voss has matured as a coach in recent seasons, both tactically and in his man management. He has also led the Power’s leadership program, with Brownlow medallist Ollie Wines praising Voss this week for helping his career bloom.

“He spends a copious amount of time looking for feedback on the way he goes about things, he’s certainly well aware of what his strengths are,” Power football department chief Chris Davies said this week.

“He’s been a great foil for Ken [Hinkley] in talking through issues and, as you heard from Ollie [Wines], he’s been a great mentor to a lot of our more senior players who have been around for a period of time now.”

Voss would fit Carlton’s initial stated preference for an experienced coach at senior level, but Kingsley, the former Port Adelaide premiership player and assistant at the Power and St Kilda, has support because of his coaching history and would be a reset for the Blues, who hope their next coach can emerge in the manner of Simon Goodwin, Luke Beveridge or Damien Hardwick. The latter has lauded Kingsley’s input.

The Blues have not made the finals since 2013 and club bosses had expected that to change this season under Teague. But an overly offensive game plan and the view that he had not produced results with the talent at his disposal led to him being removed.

The Blues had approached established coaches Alastair Clarkson, Ross Lyon and Brad Scott, while Chris Scott was to be sounded out, but the four rebuffed the club for various reasons.

“We believe his coaching style and method really complement the other members of our group, which gives a strong and holistic feel to our coaching squad,” said Hawks football chief Rob McCartney.

“He has built an impressive coaching resume over the past 13 years, with involvement in a number of high-performing football programs, including the caretaker senior coaching role at Collingwood in 2021.

“While Robert will bring his highly renowned football IQ and technical nous to Hawthorn, we are equally excited about the significant cultural impact he will have as we plan for the future success of our football club.”