Wales will be without six front-line starters against Scotland after revealing Dan Lydiate has injured the anterior cruciate ligament in his knee.

The 33-year-old flanker now faces missing at least the rest of the rugby season, not just the entire Six Nations, after suffering the heart-breaking blow 12 minutes into his Test return against Ireland.

Lydiate had not played for Wales since 2018 but now faces an uncertain international future having fought his way back in. 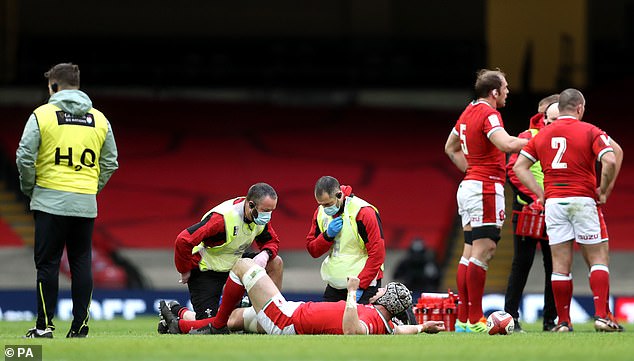 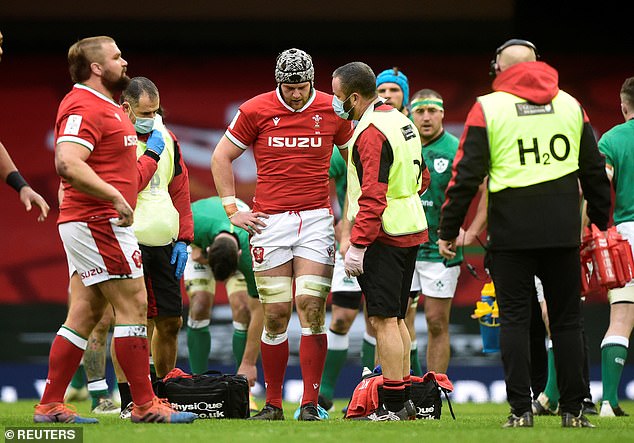 ‘It’s a tough pill to swallow for him and for us as a squad,’ said Wales’ defence coach and Lydiate’s former team-mate Gethin Jenkins.

‘We watched him a lot over the Christmas period and he’s been the in-form six in Wales. To see that happen so innocently, the first thing you do is look at the clock and it’s probably 10 minutes gone and you pretty much knew he was going off.

‘I’m really gutted for him, and you hope he gets well soon.’

Lydiate is joined on the sidelines by Josh Adams (banned), Jonathan Davies (ankle), Hallam Amos, Johnny Williams (both concussion) and scrum-half Tomos Williams who will also miss at least the Scotland game having pulled his hamstring.

‘He’s had a scan and it’s not a simple one,’ Jenkins said on Tomos Williams.

‘He’ll probably going to be ruled out for a few games and we’ll go from there.’

Wales are yet to reveal who they will call up to replace the injured half-dozen, waiting for Covid test results to come through.

But Liam Williams will be back from his ban after seeing red for the Scarlets against Cardiff Blues last month, and is in line to replace the concussed Amos out wide.

Jenkins added: ‘He’s been training with us for two weeks. Unfortunately Hallam has been ruled out so Liam becomes available for this weekend.

‘He’s served his ban and if he’s selected, he’ll be ready to go.’ 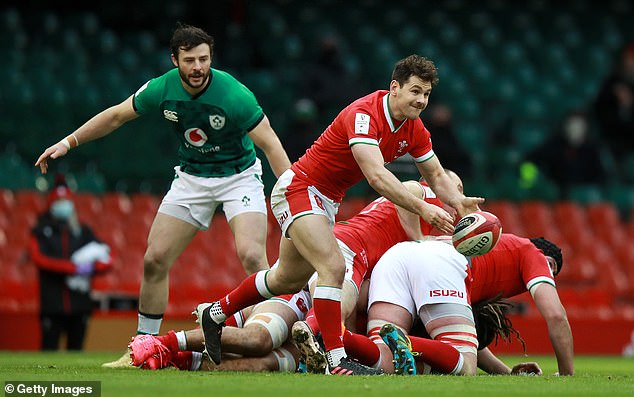 Tomos Williams, the Wales scrum-half, will miss the Scotland game with a hamstring issue

Scotland and Wales are both unbeaten after the first weekend, following wins over England and Ireland respectively. And Jenkins expects a fired-up Scottish challenge at Murrayfield this Saturday.

‘Scotland are a quality team,’ he said.

‘They have got powerful runners and they have been building. They were tough to play against in the autumn. They ground out a result against us and we want to put that right at the weekend.

‘When you win you’ve got to back it up, you can’t think you’re top of the world, you’ve got to knuckle down, work on the stuff that got you that win.’