Embattled Adelaide full-forward Taylor Walker is set to play on with the Crows next season, despite being at the centre of a racial vilification scandal this year.

Walker, who has a year to run on his contract with the club, was suspended for six matches at the start of August and fined $20,000 for racially abusing North Adelaide player Robbie Young during a SANFL game earlier this year. 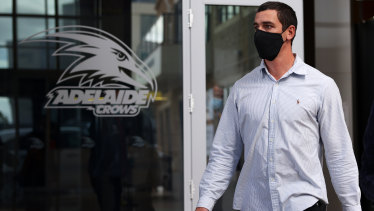 Crows forward Taylor Walker will play on with the club in 2022.Credit:Getty Images

The former Adelaide captain still has three matches of that ban to serve and won’t be available for selection until round four next year.

Walker drew widespread condemnation from the football community, most significantly from his former grand final teammate Eddie Betts who spoke to Fox Footy in the aftermath in an emotional interview where, amongst other things, he expressed how exasperated he was at trying to stamp out racism in Australia.

The incident overshadowed Walker’s spectacular resurgence on the field, which saw him kick 48 goals – his biggest return since 2016.

In the weeks that followed confirmation of the 31-year-old’s penalty, Adelaide couldn’t confirm whether or not Walker would continue playing with them next year and uncertainty shrouded his playing future.

Complicating the matter was the fact that Adelaide has four Indigenous players on their playing list.

But ultimately, they accepted Walker’s apology, and Crows list management and strategy manager Justin Reid all but confirmed that the club’s all-time leading goalkicker would line up for them again next season.

“No, I don’t think so,” Reid told AFL Trade Radio on Wednesday when asked if there was any way Walker wouldn’t play for Adelaide in 2022.

“It certainly wasn’t the greatest ending, and it’s something that we need to work through as a club and something we’ll continue to support not just ‘Tex’ but the whole playing group and the wider community.

“I know that is something ‘Tex’ is focused in on and he’s someone I check in on on a fortnightly basis and he’ll be playing at the Adelaide Football Club next year.

“He’s determined to get inside the four walls and go about his business so he’s about improving and so are we as a football club where we sit at the moment so there’s plenty of work to be done.”

AFL trade 2021: Stay across the moves, news and what it all means as our Real Footy newsletter goes daily for trade period. Sign up to get it here.