Wallabies coach Dave Rennie has no qualms with Lachie Swinton and Ofa Tu’ungafasi being shown red cards in Saturday’s final Bledisloe fixture – nor the length of their subsequent suspensions – but believes the idea of allowing players to be replaced after 20 minutes should be explored.

Australian and Kiwi administrators adopted a new rule in Super Rugby AU and Super Rugby Aotearoa this year whereby teams who had a player sent off could bring on a replacement once 20 minutes had elapsed. 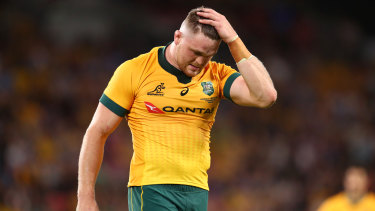 Lachie Swinton was sent off on debut.Credit:Getty Images

Asked if he was supportive of what amounts to a 20-minute red card, Rennie said: "It's something I'd certainly be interested in looking deeper into.

"Sometimes people are getting red cards for contesting ball in the air and someone falling awkwardly. There are so many variables in our game. I think it's worth sitting down and going through various parameters.

"Certainly not arguing with the decisions made on the weekend. I thought Nic Berry handled them very well and went through a process and made his decisions.

"Under the current law, [make] contact with the head and you're going to run the risk of being sent off and unfortunately two men did. I think the safety aspect of our game is really important. The judiciary agreed with the decision and both guys got suspended.” 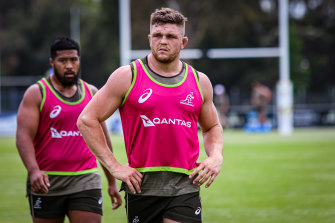 Swinton has remained in Wallabies camp but there is a chance he will be released soon given he will take no further part Australia’s Tri Nations campaign. Rennie said Swinton was "superb" on debut before he was marched from the field and hopes he can continue to bring a physical presence.

"He made an error and got severely punished for it," Rennie said.

"We're going to ask him to work on that area but we don't want to take away that edge.

Accuracy is probably a word we're looking at with him.

"A lot of it is around technical excellence because he'll be even more devastating when he's hitting lower."