The mass exodus at the Waratahs continues with news overnight back-rower Jack Dempsey will depart at season’s end to take up a contract with Glasgow.

Dempsey, who has played 14 Tests for Australia, was left out of all Wallabies squads last year after being part of the touring party to the World Cup in Japan in 2019. 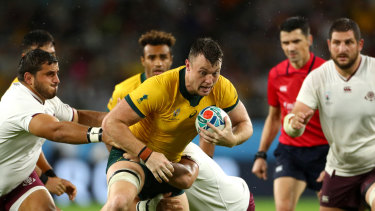 Jack Dempsey will leave NSW at the end of the season. Credit:Getty

The 26-year-old is one of a handful of Waratahs with Test experience and his exit is another blow for a franchise whose roster has been decimated in recent times.

The 2014 Super Rugby champions are investing in a younger crop of players but there is no denying the loss of experience has hurt the Waratahs in recent years and could harm their chances of success this season. They won five of 14 matches all up last year.

“Departing NSW was an incredibly tough decision,” Dempsey said in a statement.

“It’s a club I have spent my entire professional career at since joining at the end of 2014. The Waratahs allowed me to develop as a rugby player on my home soil and represent my state which has meant the world to me over the past seven seasons.

“I leave with very fond memories of the players, coaches and fans and wish the team, coaching staff and entire organisation the best of success.”

Dempsey will play out the Super Rugby AU season, as well as matches against Kiwi teams later in the year, before embarking on a new challenge in Scotland.

Fresh off a Shute Shield title with Gordon last year, Dempsey’s decision will prevent him from coming into Wallabies calculations.

Waratahs coach Rob Penney said: “Jack has been a pleasure to work with at the Waratahs, and although he has been hindered by injury on occasions, every game he plays he makes his presence felt.

“Jack is a player of great influence in our forward pack and will have a huge role to play in our 2021 campaign.”