The Warriors icon was charged in December 2019 with possessing methamphetamine for supply and importing the Class A drug. He previously denied any involvement and earlier this year said he would “fight for his innocence” after outing himself as the sportsman behind the charges. 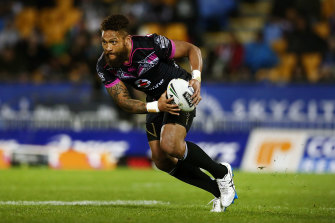 Manu Vatuvei played more than 220 games for the Warriors and 29 Tests for New Zealand.Credit:Getty

On Wednesday, Vatuvei appeared at Auckland’s Manukau District Court where he admitted a representative charge of importing methamphetamine. The remaining charges will be withdrawn.

Vatuvei was set to start trial on October 4, alongside his brother Lopini Mafi, and another man for a methamphetamine sting back in 2019.

Mafi admitted the charges last month while the other man is still set to go to trial.

Judge Jonathan Moses convicted Vatuvei of the charges and granted his application for bail on a curfew, until sentencing in December alongside his brother.

Judge Moses said granting Vatuvei bail was no indication of the sentence he would impose.

Vatuvei was once the pride of New Zealand rugby league, playing 226 games for the Warriors, 29 Tests for the Kiwis and two more for Tonga.

The 35-year-old retired due to injury in 2017, after a career spanning more than 13 years.