Home » Rugby » ‘We are getting slammed’: NRLW stars form union to voice frustrations

Rugby league’s elite female players have been given a formal route to voice their frustrations, saying they have been slammed over the “pathetic” NRLW competition.

The Rugby League Players Association has established its first Women’s Player Advisory Group, comprising of 13 current players to discuss the future of the women’s game. 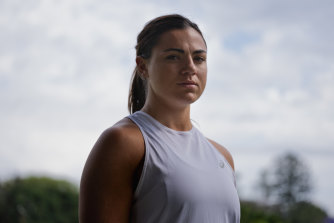 Millie Boyle has joined the Women’s Player Advisory Group and said the main priority was to push for an expansion of the NRLW.Credit:John Feely

“People [fans] say we need to play more games and that it is just a pathetic comp,” Boyle said.

“If they [the NRL] are really about supporting the women’s game and wanting to grow the game, how long are we going to have a four-week competition with four teams?

“We are outgrowing that and we are getting slammed for it as well because it’s not enough … it’s very frustrating.”

The Broncos have won the premiership for the past three years. The closest a team has gotten to beating the Ali Brigginshaw-led side was in 2020, when the Roosters lost 20-10.

‘In the AFLW, pay will go up depending on what tier you’re on, but that hasn’t really been happening for the NRL.’

“If you haven’t even played a game together, you’ve just been training, and then you’re expected to have your best performance over three games to make the grand final, it’s very unrealistic,” the Broncos star said.

The group will also focus on securing the NRLW’s first collective bargaining agreement to earn a minimum salary.

Boyle said it was frustrating to see growth in the women’s game of other sports, particularly the AFLW, which has a road map for the next few years.

“In the AFLW, pay will go up depending on what tier you’re on, but that hasn’t really been happening for the NRL,” she said.

“Unfortunately, we are kind of left until the last minute to find out what is even happening … there’s no one that is really taking control or setting out a plan for the year even. We are literally not even getting that,” she said.

Boyle said it was particularly frustrating, given the eyes brought in by women’s rugby league.

“State of Origin has some of the biggest viewership in a female game, so why the hell don’t we put three games?” she said.

“It’s not like we play before the men or anything, just give us a field and we will rock up.”

Women’s State of Origin has been locked in for June 25, just over two months away, but a venue is yet to be confirmed.

Meanwhile, the men’s State of Origin venues for June were confirmed in February.

“We want to grow the game but none of us even know what’s going on this year,” Boyle said. “Just give us a bloody field.”