Things have worked out nicely for Port Adelaide's Ryan Burton.

Admittedly "shattered" to be used as trade bait by Hawthorn in 2018 – to lure Chad Wingard from Port Adelaide to the Hawks – Burton infamously found out he was surplus to requirements at Waverley while on holiday in the United States. 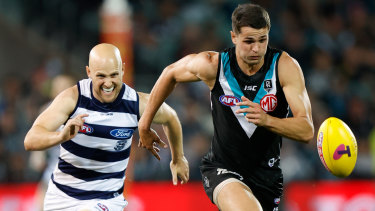 But a week out from a preliminary final and living in his home state, near family and friends, during the long distance, travel-restricting pandemic, Burton sees the move as a "blessing in disguise".

"From the outside, in hindsight, it looks like it's a really good decision," Burton said. "Obviously I am playing in a prelim in my second year here and you just look where Hawthorn are at this stage and there's a pretty big difference.

"But personally I couldn't be happier to be back in Adelaide. Me and Ken's [coach Ken Hinkley] relationship is outstanding and the trust I get from him, I couldn't ask for any more.

"In terms of the football club and coaching staff, I am absolutely loving it. Being back in Adelaide is great to be with family and friends."

That trust was on display early in the week, leading up to the Power's qualifying final win over Geelong.

Burton had only played six times in 2020. A knee clean-out after round two sidelined him through the pandemic break and then until round six. He injured his quad in round 14, and then again in round 16. Despite that, Hinkley brought him straight back into the side for the qualifying final.

"I had a good chat to Ken earlier in the week and he said he was picking me," Burton said. "I just immediately was thankful he had that faith in me.

"He basically reassured me that I didn't need to be thankful, that I'd earnt that spot over the last two years at the club and he was giving me my opportunity to play in a final.

"As soon as he got told by the docs, physios and myself that I was 100 per cent ready to go, he was backing me in. I am really grateful.

"There's nothing better than when a coach backs you in 100 per cent and gives you a lot of confidence to play."

And what of the AFL world's hesitancy to declare Port the team to beat in 2020, despite the Power going from start to finish on top of the ladder?

"People watch the footy shows, read papers, so everyone is going to hear those things," Burton said.

"A lot heard we were maybe fourth best for the year, people not rating us as high as we were.

"A lot of the boys shut that news out and didn't care.

"But deep down they probably took it into the first final wanting to prove a few people wrong.

"Hopefully that showed the AFL community we mean business this year."