Home » Rugby » When it comes to footy, Docherty is one in a thousand

Sam Docherty is a one-in-a-thousand player.

He is the rarity of players that is best left as a rarity. Docherty has played just one AFL game in more than 1000 days. 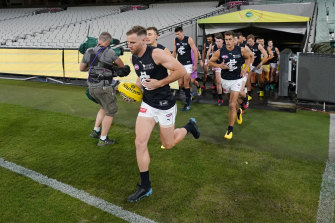 Long time between matches: Sam Docherty leads the Blues out for their only game in 2020.Credit:AAP

If football returned on June 1 (it is suspended until at least May 31) he will have played one game in 1010 days. Between times he has, of course, had two knee reconstructions.

Docherty knows how to wait. He knows about isolation and biding his time. If anyone had a pre-season for this, it was Docherty.

That said, while he is happier than most that the AFL managed one game this season, he didn’t want to go a thousand days between games.

“I have had two years when this could have happened and I wouldn’t have missed a game,” Docherty said.

He said it with a laugh, but it was said with an “if you don’t laugh you will cry’' sort of feeling about it.

“I would have knocked up four figures of days between games if we didn’t get that game, so I was glad we played,’’ the Carlton co-captain said.

“I feel like you have to look at it glass half full.’'

The timing was a little fortunate as he moved house the day before the lock-down. He has had plenty of time to unpack. Woo hoo, unpacking, what a silver lining.

The upside he really leans on is the fact that while the timing wasn’t ideal for him, for some of his teammates it could be helpful. Charlie Curnow will now be fit to play when and if games resume.

Ditto Harry McKay. And even Matthew Kreuzer, whose season looked shot when he broke his foot in that solitary game of this season, could be a sneaky chance to play depending on how his recovery goes and how late in the year the season runs.

“Charlie and Harry will have done the running but won’t have had any match practice, or less than everyone else, but then no one will have had any for months so they won’t be far off.

“Charlie potentially would have had to play some VFL – when there was one – but now he will come straight in because his preparation won’t be much different to everyone else.”

The death of the Northern Blues and the abandonment of the VFL season this year has added an extra layer of stress and uncertainty for players.

Ideas for how to keep the AFL-listed players who would otherwise play VFL match fit without games are still being worked through. There is talk of games of 12 a side between two teams or even three clubs splitting players across two full teams.

With the possibility of games being played on shorter breaks there will also be a need to rotate players and bring in ''depth'' players for fresh legs.

“It’s really difficult for a number of guys, there is so much uncertainty around the season,'' Docherty said.

“There’s the guys in the regular senior team wondering when it will start and how to keep fit and occupied.

“There’s the guys who were not regular players who don’t know what it means, there’s guys out of contract, there’s development players who were hoping to play a year in the VFL and try to maybe play a game or two. We try to get around them all because everyone is doing it tough in their own way.''

Football, like the rest of society, is in a state of flux. The game Docherty came back to was vastly different to the one he played two years earlier.

It was shorter to start with. He was not opposed to the shorter game but not completely convinced. He found himself feeling more soreness after the lower-intensity but longer-duration Marsh Series games than he did in the only AFL match.

“I definitely pulled up better than I expected,” he said.

“The biggest observation of our game and the whole round was the impact the shorter game had on momentum and scoring.

“Obviously it would have been nice not to give them [Richmond] a five-goal start in the game and we used our tickets getting back into it.

“Usually in a 30-, 32-minute quarter there might be two or three momentum swings because there is enough time but if a side get a run you don’t have time to slow the game and then get momentum.

“You can’t slow momentum and go defensive for a period and then attack, you have to just throw caution to the wind and attack them, so it will be interesting to see how it goes if it continues to produce attacking footy.

“I am not sold on it, but not against it.

“I am trying to wrap my head around so many things that are changing in the game and with so many unknowns it’s really difficult.”

The quarantine hubs are one of those things he is trying to wrap his head around. He is newly married but without children so it’s not ideal but still relatively easy for him to go away for a month to play.

“I understand for the players with kids, their wives might be working as well, so for them to just leave is difficult.

“As players we said we would do whatever we could to help the game and we will. We will play wherever.”