The question used to be asked at the beginning of AFL grand final week: "who will take Charlie home?"

Now that question is redundant because we have been fairly sure of the answer for months. We know who is taking Charlie home because he's the same bloke the bookies have been telling us for six months is the short-priced favourite to win the medal named after Charles 'Chas' Brownlow. 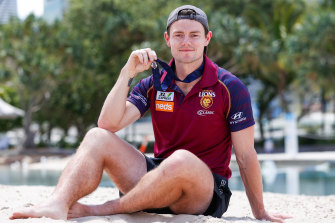 Lachie Neale was the outright favourite to win the Brownlow Medal. Credit:Getty Images

The only upsets at the Brownlow now are among those who wanted the chicken and got the beef, although this year's scaled-back virtual event was not a sit-down dinner. The surprises are not about the winner but about frocks and mispronounced names.

Oh, and the fact Brownlow night wasn't on Brownlow night this year. That was a surprise. For no obvious reason it was held on Sunday night instead of the regular Monday night before the grand final. Apparently like much of the year the season it was about just getting it done and the broadcasters wanted to toy with something different.

This year the more pertinent question was not who would take Charlie home. It was: "actually, where is Charlie?"

When asked at the end of the count, someone at the Gabba scanned the room and said, 'there he is over there' and pointed to a jeweller's plastic bust with a thin blue ribbon draped over it sitting at the side like a silent auction item at a trivia night.

Once they eventually found Charlie the silliness went to the next level with Lachie Neale told to go and get it and hang it around his own neck. 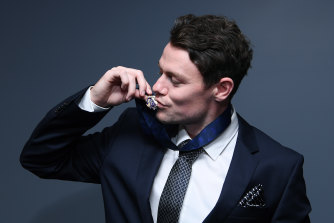 No one formally presented Lachie Neale with the Brownlow Medal. Credit:Getty Images

Why? Well the tradition is the previous year's winner hands over the medal and Nat Fyfe was in Perth. So with Fyfe only available on Zoom everyone else kept their distance and Neale was left to stand there wondering if he had actually won anything.

It was a cringe to rival the year they put everyone on a carousel so you could get that important shot of bums and the back of heads you never knew you had been missing out on. That was the Brownlow's Meatloaf moment.

Simon Black – a former medal winner from Neale's very own club – was actually in the room and could have handed over the medal to Neale. Not just the state, he was barely social distancing away from the new winner sitting in the same room. You could see him off to a side strumming his pawn broker guitar, still wet from the tears of its penniless former owner.

The Brownlow has always been designed for TV in the way a budget speech is designed for TV, minus the frocks. In a footy sense it's important and it used to be a bit tense so you'd tune in to see how badly misguided the umpires' opinion of the best players were. There's only so much you can do with a night based around calling out names, but it used to at least have an element of surprise.

The break in the count to flick over to The Front Bar just left you hoping they had decided to really freshen things up and hand over the rest of the count to Andy, Mick and Sam with Teaser in his crushed velvet suit on special comments.

That said in those ad breaks you did have to feel for the Crows sitting at home watching the count and squirming every time ads for the SAS commando camp show came on.

Nothing about this year has been normal so it was only fitting that the Brownlow count too had an exceptional feel about it – other than the predicability of the winner that is.

It was always a poop-sandwich to have to broadcast an event when the winner is already known, no one is in the room and the TV screen looks like another Zoom meeting, so sympathies for having to deal with that smash up. But sending the winner on a treasure hunt to find the medal and hang it around his own neck should last as long as the carousel.

Related posts:
Basketball News:
Liverpool edge past Ajax to seal top spot in Champions League group
What channel is Man Utd vs PSG on? TV, live stream, kick off for Champions League match
Frank Warren marks 40 years in boxing with irony of selling no tickets again
MLB News:
FanDuel Picks Week 13: NFL DFS lineup advice for daily fantasy football cash games
Kyle Shanahan: 49ers' multi-week stay in Arizona not a 'bonding' opportunity
Saquon Barkley: Joe Judge, Giants staff 'doing a tremendous job' in first season
Recent Posts
This website uses cookies to improve your user experience and to provide you with advertisements that are relevant to your interests. By continuing to browse the site you are agreeing to our use of cookies.Ok