Cameron Smith has been called many things during his career — some complimentary, others not so much — but I'm thinking you've never heard him described as a "Punctuation Nazi".

Most footballers barely glance at the final proof of their autobiography before it's printed even though it's been written by someone else. They leave it to their managers. 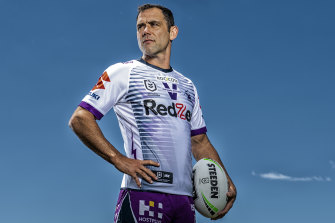 Is this the end for Cameron Smith? Don’t bet either way.Credit:Getty

Storm coach Craig Bellamy challenged him during their first pre-season together in early 2003 about training "within himself", and since then Smith has been meticulous in his preparation through the week and then execution on game day.

Smith's brilliance is his knowledge of the smaller details, especially when he's slowly moving into dummy half and sizing up the opposition like Terminator moving in for the kill.

Within seconds, Smith decides whether he will run, pass or kick and not even the most discerning of eyes can pick it.

"He plays every minute, of every game, everywhere, every time," said Penrith coach Ivan Cleary, who is plotting Smith's demise in Sunday's NRL grand final. "I've never seen him tired, looking ruffled. Ever."

Smith laughs off the "ref whisperer" jibes attached to him but there's a certain subtlety in the way he speaks to them, too, and it works.

As one referee has described it to me: "He engages with us in a way where you feel like blowing time out, ordering a couple of skim caps and having a good chat about it".

Not everyone shares such warmth for the Storm captain and the growing animosity and outright nastiness directed at him and his family over the final years of his career means he's kept most of us at arm's length.

We know the footballer but not the man, and that's just plain weird for someone we've watched for the best part of two decades.

When I met with Smith and his wife Barb in a Melbourne cafe one morning in March 2019 to discuss ghostwriting his book, I found two people very wary of the media but eager to set the record straight on a number of subjects; from missing the 2008 grand final because of suspension to the 2010 salary cap scandal to the 2014 Alex McKinnon tragedy to the grubby innuendo about their personal lives. 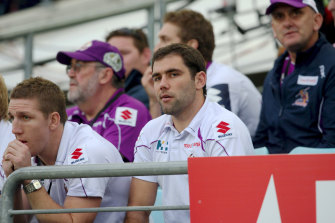 Smith watches the 2008 grand final loss to Manly from the stands after his suspension.Credit:Dallas Kilponen

Since that morning, following hours of interviews in his backyard and then over the phone because of COVID-19 restrictions, I came to know the man and his family as best I could.

What I found was the player with the most extraordinary football career leads the most unremarkable life; a simple man devoted to his family who loves his cars, does renos on his house, plays golf and walks around in boardies, thongs and a hoodie.

One day, we went around the corner to his local pub and, over a few quiet beers, watched on my laptop the epic 2008 semi-final between the Broncos and Storm. He explained small moments that have made me look at rugby league in an entirely different way.

Smith is engaging, articulate, intelligent, funny, grounded and straight out likeable — when you can get him.

By his own admission, he's a nightmare to get on the phone but you learn not to take it personally because he doesn't return texts or calls to most people.

It's frustrating, sure, and is often misread as aloofness and arrogance by others, but it speaks to his desire for an uncomplicated life.

More than once, Smith has said to me he could happily slip into complete anonymity in the middle of nowhere once he retires.

What Smith has never fully grasped is the interest in him. As he sees it, rugby league is the game he plays, not a scene nor a lifestyle.

It's been intriguing to watch over these past 18 months as he wrestles with certain media types and the public's perception of him. 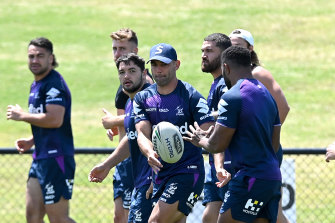 Those who have coached, trained or played for or against Smith remain in awe of the 37-year-old perfectionist.Credit:Getty

The greatest misconception about the man is that he craves attention, drama, intrigue.

There's an argument Smith could have played the media game better. Instead of turning a cold shoulder to certain people, bring them inside the tent.

Former players I've spoken to think it's admirable he's never kow-towed to his critics in order to change the narrative, but the consequence is it brings more attention to himself.

The Storm often believe stories are placed to distract their players, especially the captain, around headline matches.

Having spoken to him about retirement at length for more than a year, it’s clear that he is genuinely torn.

That paranoia has grown since the 2008 season when the spotlight was cast on the club's wrestling techniques before Smith was rubbed out of the preliminary and grand finals for his "grapple tackle" on Broncos forward Sam Thaiday in the semi-final.

Is the paranoia justified? It's often misplaced. Not every negative story is part of some hidden agenda.

But the sheer volume of criticism levelled at Smith of late feels like a bitter witch-hunt.

The story that seemed to wound the most came last year when News Corp revealed NRL boss Todd Greenberg had presented Barb Smith with a ring to commemorate her husband becoming the first player to reach 400 games. 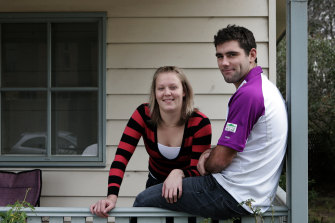 Smith and his now-wife Barb in 2006.Credit:Justin McManus

Questions were first asked of Greenberg but the focus quickly shifted to the Smiths. They were painted as greedy and selfish; like they were snatching cash out of the hands of hardworking officials at battling grassroots clubs.

In Smith's mind, this crossed the line because it not only passed judgment on the type of people they were but dragged his wife into an ugly public debate.

Barb Smith is the unsung hero of her husband's book because it brings to light the sacrifices she's made for his career.

She's a ripper: honest, up front and devoid of bullshit. She's a person, not an Instagram account.

She declined to be interviewed this week, fearful that anything she said would be picked apart and used against her husband in what could be the final match of his career and, to be perfectly honest, that's sad.

Sunday's grand final looms as Smith's last match but those who have made bold declarations about his future in recent months are simply making it up.

Allen and Unwin have sent Smith's book to the printers without knowing if he will retire. It will find out at the same time as the Storm.

The problem is the man himself does not know and I believe him when he says it. Having spoken to him about the subject at length for more than a year, it's clear that he is genuinely torn.

His 37-year-old body isn't telling him to finish but he struggles with the concept of playing under anyone other than Bellamy should his family relocate to Queensland.

Then there's the fear of the unknown. What does retirement look like when all you've ever known is a life playing football?

If I've come to know the man at all, Smith is waiting until the last minute to make the decision — so it's the right decision.

A premiership might be the full stop he's been looking for.

THE QUOTE
"With the greatest respect to Richmond, they're not Hawthorn in their multiple premierships in a row. I don't think they're Geelong or St Kilda or Collingwood through that 2009-2010 period." — Geelong coach Chris Scott in March. Reckon that comment might be stuck on the defending premier's dressing-room wall on grand final day? 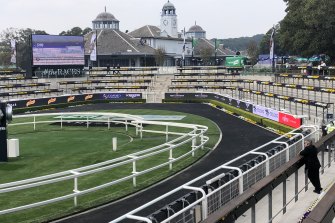 Les Bridge, trainer of the winner Classique Legend, watches The Everest by himself from the mounting yard.Credit:Adam Pengilly

THUMBS UP
Oh the poetic beauty of 82-year-old trainer Les Bridge winning the $15 million The Everest — an event pitched to the younger generation of racegoer — with the striking grey Classique Legend. Shame the horse is off to Hong Kong.

THUMBS DOWN
The Daily Telegraph's Dally M blunder was a monumental but innocent mistake. More concerning was the way NRL officials were fuming privately but said nothing publicly, showing the Murdoch empire still wears the big pants in this game.

IT'S A BIG WEEKEND FOR …
Russian Camelot, the favourite in the WS Cox Plate on Saturday afternoon. Has to overcome the widest barrier and having never raced at Moonee Valley before.

IT'S AN EVEN BIGGER WEEKEND FOR …
Amy Shark, the former Titans video producer who turned into an indie pop singer-songwriter superstar and will headline the pre-match entertainment at the NRL grand final.