The Wallabies will not drop a knee in support of the Black Lives Matter movement in their next Test against the All Blacks because they don’t want to “make a political statement” and would rather honour Indigenous Australians when they wear a First Nations jersey at ANZ Stadium on October 31.

However, the playing group has agreed it would like to see Australia’s First Nations people represented on every Wallabies jersey, not just on special occasions. 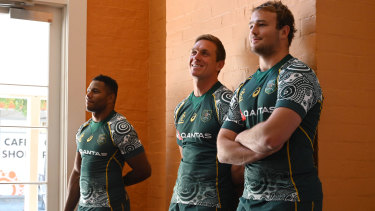 Wallabies coach Dave Rennie revealed the playing group had made a unanimous decision they won’t drop a knee during the national anthem in support of the Black Lives Matter movement, which spread across world sport following the death of George Floyd, a black man, while in police custody in the US.

The discussion only came about because Wallabies back Dane Haylett-Petty said the group would consider doing so after being asked by a reporter on Wednesday whether it was something that could occur.

On Thursday, former Wallabies captain Nick Farr-Jones warned the national side that it wasn’t a good idea to do so because they risked alienating supporters and was too controversial a move.

“No, we won’t [be taking a knee] ,” Rennie said on Friday. “Our focus is around our First Nations people and the Indigenous jersey. We’re not looking to make a political statement. 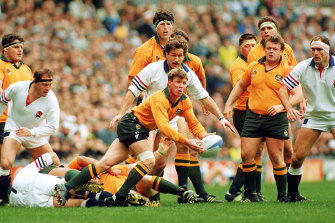 Nick Farr-Jones came under fire for his statements saying Australia did not have a significant issue with race.Credit:Getty Images

Rennie then said there was a push for more regular recognition in every gold jersey.

“We’ve certainly talked about the Indigenous jersey and as a group we’d like to see that represented every week in our Test jersey, not just as a one-off,” Rennie said. “I think this is the first step in regard to embracing that part of our history.

“What we’re trying to highlight is First Nations is part of our DNA. It needs to be reflected in what we do every day, not just one or two times a year. We think having that reflected on our Test jersey every week is really important.”

"Rugby Australia and the Wallabies condemn any form of racism or discrimination and also acknowledge that we are still on the path to reconciliation," Clarke said. "I'm really pleased the players and management have come together to speak about this, as they would with other important social issues. It was measured, appropriate and mature and I congratulate the team as they explore more opportunities to recognise issues facing First Nations people and all Australians."

It is the fourth time Australia will wear a First Nations jersey, having done so against New Zealand in 2017 in Brisbane, against England at Twickenham in 2018, as well as at the World Cup against Uruguay.

“I love it,” Rennie said. “I know the players love it and I’ll wear it with pride next week. 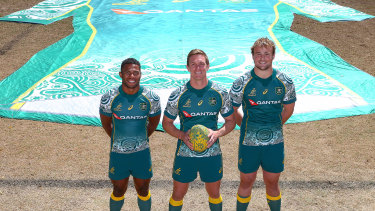 Next Saturday will mark the fourth time the Wallabies have worn the special jersey since 2017. Credit:Getty

“I coached the Chiefs for six years where there is a really strong multi-flavour to that jersey and reflected the history of our region.”

As for a potential jersey clash with New Zealand, given the First Nations jersey is a little darker in colour than the traditional Wallaby gold, Rennie didn’t think there would be a issue.

“I don’t think it will clash unless [referee] Ben O'Keeffe is colour-blind,” Rennie said. “There’s certainly enough white and I don’t think it’s an issue. It might have been an issue if we were playing South Africa.”

The Wallabies are back in camp in the Hunter Valley and will continue training there throughout the early stages of next week before Saturday’s third Bledisloe Test in Sydney.

Australia drew with New Zealand 16-16 in Wellington before falling 27-7 to the Kiwis at Eden Park.

Rennie’s men will need to win both Tests against New Zealand on home soil to regain the Bledisloe Cup for the first time since 2002.

“I think the first Test showed there is a lot of character in this group,” Rennie said. “I reckon we’ve got a massive upside and we’re going to get better over time and that’s why we’re very excited about having a lot of Tests in quick succession.”

Related posts:
Basketball News:
Jermain Defoe: Rangers striker motivated by 'horrible' Betfred Cup final loss to Celtic
Lucas Digne: Everton can cope without injured left-back, says Carlo Ancelotti
Everton, ‘Dirty Leeds’ and the infamous 1964 battle of Goodison Park
MLB News:
Terry McLaurin on game-changing tackle: 'It's a different type of mentality'
NFL Week 12 guide: Picks, bold predictions and fantasy nuggets for every game
Colorado at No. 19 USC canceled due to virus
Recent Posts
This website uses cookies to improve your user experience and to provide you with advertisements that are relevant to your interests. By continuing to browse the site you are agreeing to our use of cookies.Ok