Home » Rugby » ‘Wighton deserved my spot’: The Blue stunned to stay in Fittler’s side

NSW wrecking ball Siosifa Talakai was stunned to learn he had kept his spot for the State of Origin decider, insisting Jack Wighton deserved to have his bench position in Brisbane.

Talakai, who was given just 17 minutes as a reserve in the Blues’ game-two rout in Perth last month, has put his hand up to trade his usual centre position for the down-and-dirty thrust in the middle of the park, if required in Origin III.

Talakai and Penrith centre Stephen Crichton withstood the challenge of Wighton, who was unavailable for game two after contracting COVID-19, when Fittler finalised his squad. Wighton was widely considered NSW’s best in the Origin I defeat in Sydney on June 8.

But Fittler maintained the status quo from the successful Perth team. It is the fifth straight year he has kept the faith following an Origin victory, outside of changes forced by injury or suspension.

And it caught even Talakai by surprise, the 25-year-old conceding he thought he would be a one-game wonder in this year’s series with Wighton’s return.

“To get the opportunity again means a lot because there’s quality players missing out,” Talakai said. “I thought Jack Wighton deserved my spot for sure. 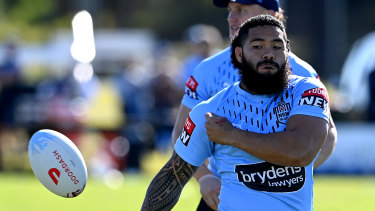 “If I missed out it didn’t bother me. It’s Jack Wighton, a quality player, a freak and he deserved that spot. I was just going to go back and focus on my job at the Sharks.

“Freddy made the call and I’m happy he’s got confidence in me to do my job and that’s pretty big leading into a big game. I’m grateful I got the call-up and I just want to make the most of it again.”

While at his devastating best at centre this year, Talakai is even preparing himself to be used as a middle forward at Suncorp Stadium with the Blues’ stocks stretched in that area.

Jacob Saifiti is poised for an Origin debut after the withdrawals of Jordan McLean and Payne Haas, while Junior Paulo and Angus Crichton, usually an edge back-rower, will form part of the middle rotation.

“I’m happy to do that, it just means I’ve got to tackle more,” Talakai joked of a potential stint around the ruck. “That’s all.

“We haven’t really spoken about a game plan yet and what position I’m going to be playing or for how long, but whatever call Freddy makes I’m happy to do that.

“I didn’t get many minutes [in game two], but I’m just happy to be there. I was grateful for the opportunity.

“I deal with pressure pretty well. I used to struggle a lot when I was younger. There’s obviously huge stakes and it’s do-or-die, but it’s just another game of footy. I’ll do my best and do my job. As long as I know I gave it my all for the boys and to come away with the series would be a bonus.”

Watch the State of Origin decider exclusively live and free on Channel 9 and 9Now.