Bronson Xerri will front the NRL's anti-doping tribunal as soon as grand final week after his legal team confirmed on Wednesday an intention for the teenager to fight for his career.

The Sharks speedster, considered one of the game's brightest prospects before his positive to prohibited substances was announced earlier this year, failed a drug test last November when he was recovering from shoulder surgery. 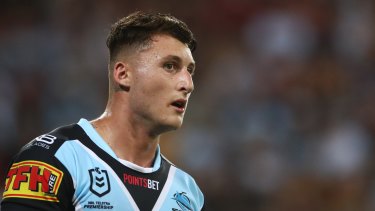 Xerri, who turns 20 on Thursday, missed the first two matches of the season before the COVID-19 suspension and was stunned when he was notified of his failed test result just days before the competition restarted in May.

The Sharks have been carrying Xerri's salary on their cap even after he was stood down and club officials have heard little from the player, who has been dealing with the controversy away from the limelight.

John Morris' side has sorely missed arguably their best attacking weapon, who bagged 13 tries in his rookie NRL season last year. The club is in eighth place and can still limp into the finals, even if they are beaten by the Warriors at Kogarah on Sunday night.

Cronulla is expected to be granted cap relief once Xerri's matter is finalised.

Related posts:
Basketball News:
Conor McGregor left on crutches after brutal KO by Dustin Poirier
RA pushing ahead with Super Rugby AU plans as Force eye case numbers
Warriors’ Steph Curry passes Reggie Miller for second place in career 3-pointers
MLB News:
Source: Chiefs RB Edwards-Helaire likely to play
Packers’ Davante Adams, Dodgers’ Joc Pederson formed dynamic receiver duo in high school
Cole Beasley’s rap album shows the other side of Bills wide receiver
Recent Posts
This website uses cookies to improve your user experience and to provide you with advertisements that are relevant to your interests. By continuing to browse the site you are agreeing to our use of cookies.Ok