Home » Rugby » ‘You could lose your eye’: Sam Burgess opens up on grand final injury

It has become one of the most iconic moments in rugby league history, but Sam Burgess wasn’t supposed to be a part of it.

The first hit-up of the 2014 NRL grand final, the one that resulted in Burgess suffering horrific facial injuries that could have resulted in him losing an eye, should have been taken by someone else. 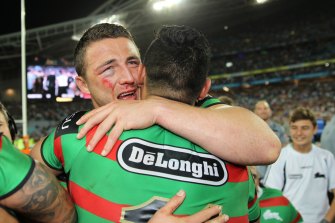 Sam Burgess etched himself into grand final folklore in the 2014 decider.Credit:SMH

“It was an instant fracture,” Burgess said. “I had three fractures in my eye socket down the side of my jaw. I knew instantly I was in a bit of trouble.”

Only now, six years after that fateful moment, can it be revealed just much trouble Burgess was in. The South Sydney legend opened up about the incident in the first of a series of ‘X-Factor’ webinars on Thursday morning hosted by Bell Partners, the firm of Sydney accountant and financial advisor Anthony Bell.

Burgess, a former English international, revealed that Rabbitohs doctor Andrew McDonald warned him at halftime that he risked losing his right eye if he returned for the second half.

“The first person who saw me (in the sheds) was my doctor, Andrew McDonald,” Burgess said. “Great guy, very straight-faced guy, doesn’t show a lot of emotion.

“He stood with his straight face there at the entrance to the locker room and said, ‘C’mon Sam, we’ll go into the back room, I need to check your face.’

“I said, ‘Andrew, with all due respect, I want to sit around the team, I need to feel what’s going on, I want to listen to my coach talk. I’m going to play on and you’re not going to tell me anything that’s going to worry me here.’

“He said, ‘Well I just need you to warn you that you could lose your eye if you take a collision to it. And don’t blow your nose.’

“I sat down, Madge did his speech – not that I remember it because I was totally in the zone – and we went back out there and got back into the process and got on with the job.”

Burgess did more than that. His performance was one of the most remarkable in grand final history, earning Clive Churchill medal honours as he helped South Sydney break a 43-year premiership drought. In putting his health at risk in doing so, he is mentioned in the same breath as John Sattler and Andrew Johns, who overcame a broken jaw and a punctured lung respectively in other memorable grand final triumphs.

At no point did Burgess consider coming from the field despite the severity of the injury.

“As I was running, with my face, the bones were actually moving up and down and bouncing around,” Burgess told the webinar, which was set up to provide stories of inspiration to clients and staff during the coronavirus outbreak.

“My eyesight was really affected on this side as well. It was concerning at the start but I could manage the initial pain.

“There is a funny story in the game. We had a try disallowed about 15 or 20 minutes into the game.

“Every time I ran my face was still bouncing. Lote Tuqiri scored in the right-hand corner and the try was called back and disallowed. I’d gone to cuddle Lote Tuqiri and celebrate and I was the first one to him.

“Greg Inglis, the athlete that he is, jumped on the back of my head, which in turn collided with Lote Tuqiri’s head. It was right on the fracture.

“Anyway, it helped wedge the fracture in behind where it was. After that it wasn’t bouncing around as much.”

Burgess' injury made him a target for the Bulldogs, particularly during the second half.

“There was a scum in the second half – I forget the players’ name – (and) my face was split so bad,” he said.

“Whether they said something at halftime to try to get me out of the game (I’m not sure). We’re packing down for the scrum and as we bent down he’s come underneath and tried to headbutt me on that side of the eye.

“So I pulled out, we went to reset the scrum and he did it again. They were attacking, they were trying to come for my eye. Or at least that player was.

“It was just another hurdle. I managed to stay calm with that, losing my cool at that moment wouldn’t have helped my team at the time.

“If anything it helped me to think they were desperate.”

There was nothing between the teams for the opening hour. But with Burgess leading from the front, the Rabbitohs overran the Bulldogs during the final quarter and prevailed 30-6. It sparked a series of iconic images, including Burgess’ warm embrace with Souths co-owner Russell Crowe and receiving his Clive Churchill medal from Joyce Churchill.

“I’m not much of an emotional guy, I’m not a crier. But here I am crying on the big stage in front of I guess half of Australia.”