The Sydney Swans will have played just one game in 27 days by the time they arrive at a sold-out SCG for a grand final qualifier but coach John Longmire is confident his side will rise to the occasion against the Collingwood Magpies.

General allocation tickets for Saturday’s clash were snapped up within 30 minutes as Swans fans hope to see their team win the first preliminary final held at the SCG since 1996. 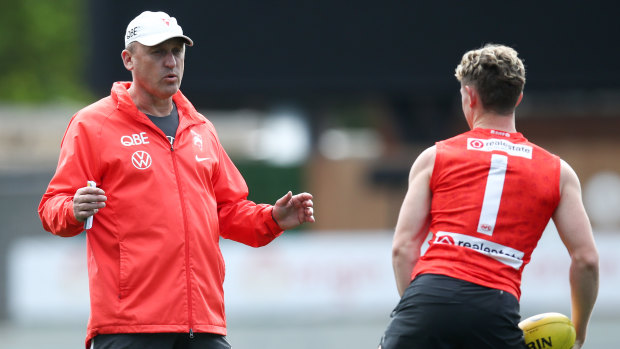 John Longmire is bracing for a fierce preliminary final.Credit:Getty

Longmire keeps his cards close to his chest, but has the Swans coach taken a moment to step back and assess a stirring rise that has led his side to the cusp of a grand final?

“I don’t take a step back at all, I’m looking forward all the time,” he grinned.

Towards a clash with Collingwood and the prospect of deploying a weapon to shut down Jordan De Goey, who has averaged 25 disposals and 10 score involvements per game during the finals series.

De Goey’s presence is a massive boost for a club trying to counter its struggles in Sydney by adjusting the dimensions of its training ground to mirror the smaller confines of the SCG.

The Magpies look a different team with the 26-year-old midfielder. He missed their round 22 loss to the Swans due to a hip flexor injury.

“Clearly he poses a threat, he’s a very good player in great form,” Longmire said. “We look at that obviously, but we also look at [Jack] Crisp, [Scott] Pendlebury, Josh Daicos, Nick Daicos; they’ve got plenty of great players, Steele Sidebottom. It’s about the collective.

“No matter who we play on [De Goey], we like to play two-way footy. It’s not just about going out and hoping you have more possessions than your opponent, it’s about playing two-way football in our midfield group.

“It’s also about the midfield mix, what the other match-ups look like as well. Crisp, you saw the way he played on the weekend, his run and carry was elite. Pendlebury, the rest of that midfield group as well as De Goey, are all in good form. 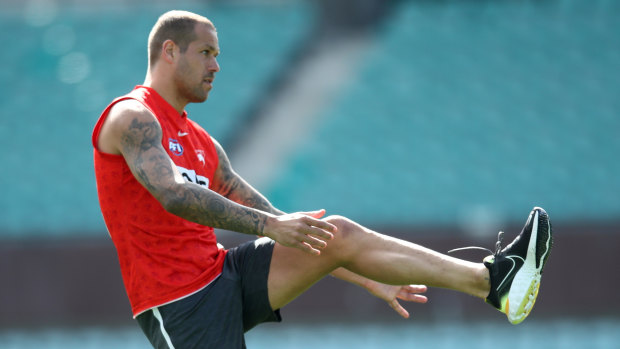 Lance Franklin has been tipped to fire.Credit:Getty

“We prepare for Collingwood and playing Collingwood at their very best, that’s what’s in our mind at the moment. I’m that way anyway, and our team is like that, very much looking at what’s in front of us.”

What about a preliminary final at a heaving SCG? The sense of occasion will be more familiar to some, like Lance Franklin. The superstar forward prepared away from the main group on Tuesday – hardly an unfamiliar sight in his 17th season – and was kept quiet in the opening week of the finals, but Longmire is confident he will bounce back for a task that will not be any easier.

For those yet to play a preliminary final, Longmire will issue a simple mission statement.

“I just tell them to keep focusing on what works. What you know works and understanding your role in the team at any particular moment is important. Putting pressure on the opposition is important. Playing two-way footy is important,” Longmire said.

“It’s fantastic to be able to play in front of a big crowd here at the SCG and we understand the importance of a prelim final, but as far as the game itself when the siren goes, we need to get the job done and play the sort of footy we play. Play by play, and stay in the moment.

“We’ve got some experienced players who can share that experience with the younger players … but you need to experience it yourself, too.”