Napoli crashed out of the Europa League after failing to overcome a two-goal first-leg deficit against Granada.

Piotr Zielinski found the back of the net with just three minutes gone to provide the hosts with the perfect start at the Stadio Diego Armando Maradona.

Fabian Ruiz put Napoli back in front on the evening shortly before the hour mark, but the Spanish side held their nerve to take a 3-2 aggregate win and progress to the last 16.

AC Milan are also through to the next stage after winning their tie against Red Star Belgrade on away goals.

The two sides drew 2-2 in Serbia last week before Franck Kessie’s ninth-minute penalty handed the advantage to the Italian side in the return rubber at the San Siro.

El Fardou Ben Nabouhane hauled Red Star level, but their quest for a winner was scuppered when Marko Gobeljic was sent off with 20 minutes remaining.

Roma joined their Serie A counterparts in the next phase after they completed a 5-1 aggregate victory over Braga following a 3-1 second-leg win at the Stadio Olimpico.

Dutch giants Ajax booked their spot in the last 16 with a 2-1 victory against Lille.

Ajax triumphed by the same score in last week’s opening rubber and Davy Klaassen’s goal after 15 minutes provided Lille with an uphill task.

Yusuf Yazici netted from the penalty spot after 75 minutes to draw the French side level on the evening, but David Neres scored in the final minutes as Ajax closed out the tie.

Substitute Ahmed Mahgoub was the hero for Olympiacos as his late goal knocked out PSV Eindhoven.

Eran Zahavi’s first-half double looked to be enough to send the Dutch side through on away goals, before Mahgoub struck with only two minutes to go to seal a 5-4 aggregate win for Olympiacos.

Mergim Berisha gave the Austrian visitors hope with his first-half strike to reduce the deficit to just one goal.

But Moreno scored five minutes from the interval before sealing the last-32 clash with a penalty in the closing stages.

Pierre-Emerick Aubameyang scored a late winner – his second goal of the match – as Arsenal edged out Benfica in Athens.

The Gunners were just three minutes away from crashing out on away goals – despite both legs being played at neutral venues – before Aubameyang’s header saw them seal a 4-3 aggregate win.

Manchester United drew 0-0 with Real Sociedad at Old Trafford as they saw out a 4-0 aggregate triumph, but fellow Premier League side Leicester failed to make it four English teams in the next stage after they lost 2-0 at home to Slavia Prague.

He slotted home just 16 seconds after coming off the bench at half-time as Rangers progressed 9-5 on aggregate.

Elsewhere, Molde and Shakhtar Donetsk moved into the next round with comfortable aggregate wins over Hoffenheim and Maccabi Tel-Aviv respectively. Young Boys, Dynamo Kiev and Dinamo Zagreb will also be in the hat for Friday’s draw.

When is the Europa League last-16 draw? 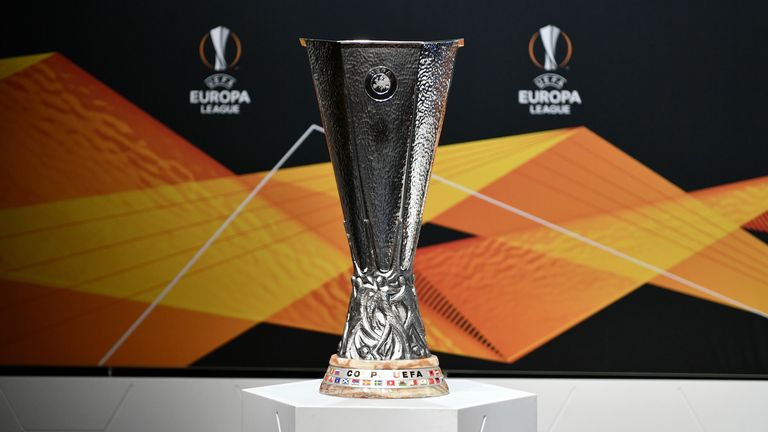 The draw will take place at midday on Friday, February 26 in Nyon’s House of European Football at 12pm UK time. You will be able to follow it across Sky Sports’ platforms.