When Gerhard Struber took over at Barnsley last November, he transformed the fortunes of a side ailing at the wrong end of the Sky Bet Championship.

Under his predecessor, Daniel Stendel, the Tykes had won just one of their opening 16 games but the Austrian’s arrival brought a focus on hard work, defensive stoutness and the ability to hold firm in games decided by fine margins.

The dreadful start they made during the first three months of their return to the second tier, however, made it nigh-on impossible to escape the clutches of the bottom three, where they remained until the very final moments of the final day, when a stoppage-time goal from Kenya international Clarke Oduor saw them survive relegation in the most dramatic of circumstances. 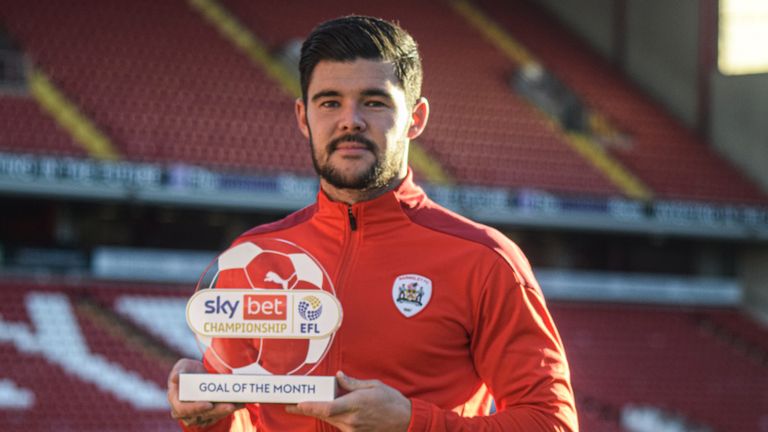 “After that game, it was strange because of Wigan’s points deduction [which was confirmed on August 4], we didn’t know if it was 100 per cent certain that we’d actually stayed up,” Barnsley captain Alex Mowatt tells Sky Sports.

“It was an unbelievable feeling when everyone was celebrating, though. The feeling of promotion from League One the season before was slightly better but that was definitely the second best day of my career so far. It was massive.

“The club has been up and down for quite a while now so it was massive to stay up last season and hopefully we can build on that this season.”

Despite the nature of their survival in July and the morale boost it brought, this season got off to a statistically worse start. A 2-0 loss to Reading followed a 1-0 opening defeat to Luton at Oakwell and by October’s international break, Struber’s side had one point from four games, with just one goal scored. Three draws under caretaker Adam Murray followed, before the club made another of their bold managerial appointments when former Bayern Munich defender Valerien Ismael was unveiled on October 23. Four days later, he presided over a resounding 3-0 win over QPR – the first time Barnsley had scored more than two goals in a game since February.

“It was disappointing [to lose Struber] because it was so early on in the season and he was the one who kept us up last season,” Mowatt continues.

“But the new manager has come in and I think everyone has enjoyed working with him so far. They both had different styles of playing but it has been a quick transition and he’s done well. Before the new gaffer arrived, we were around that bottom three and we all said that we didn’t want to be in the same situation as last season.

“It’s massive to pick up points early and to keep picking points up throughout the season, rather than having to cram all the points in late on. Under the new gaffer, it’s more about getting the points rather than playing well and I think that has helped us massively.”

It was a near faultless start for the former France U21 international, as he picked up four wins and four clean sheets in his first five games in charge, before nestling in 16th – ahead of Tuesday’s visit to St Andrew’s to face Birmingham – after consecutive defeats to a pair of promotion hopefuls in Brentford and Blackburn.

If he can turn around his side’s largely average performances on the road, it won’t be long before they are starting to pull further away from the danger zone they currently hover six points above.

“Having survived in the way that we did and then brought new players and staff in, I think everyone at the club is chasing different goals this season to avoid how last season went,” said Mowatt.

“We prefer playing the games than training, so I think the hectic schedule over the next month will suit us. It might stop the niggling injuries people keep getting and hopefully it does so.”

It is safe to say it has been a gripping few months for Barnsley, both on the pitch and off it. Now, though, things are heading in the right direction.