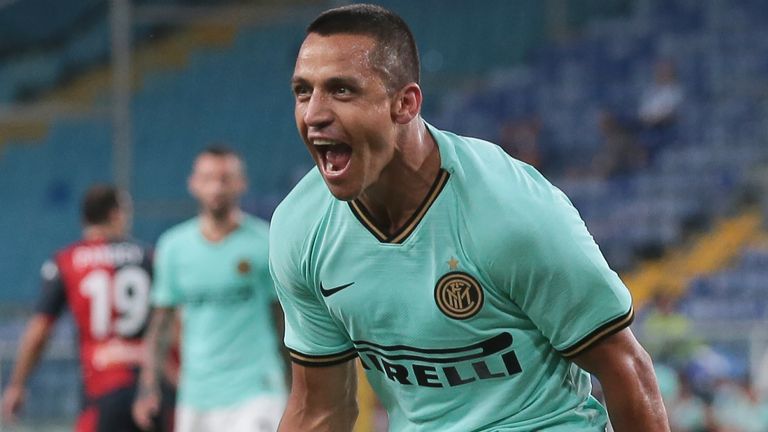 Two goals by Romelu Lukaku and one by Alexis Sanchez helped Inter Milan to beat Genoa 3-0 and put more pressure on Serie A leaders Juventus.

Former Manchester United striker Lukaku broke the deadlock when he headed in from Cristiano Biraghi’s cross in the 34th minute.

Inter coach Antonio Conte had complained regularly about the difficulties posed by a hectic fixture list and high temperatures, but his side were rewarded by two late goals. 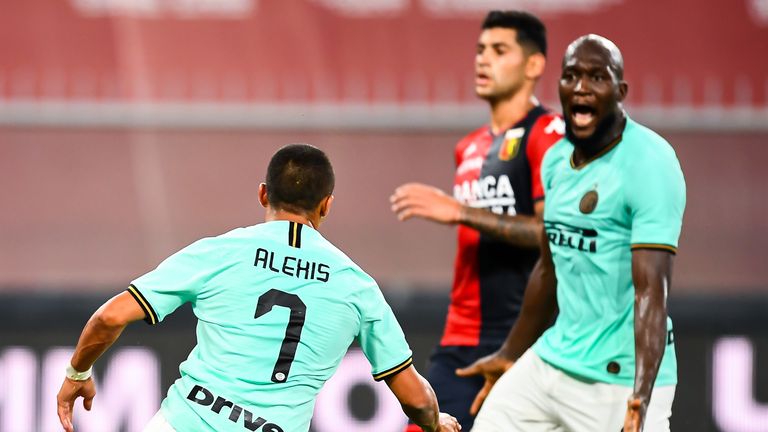 Victor Moses, on loan from Chelsea, slipped past a defender and his low cross found Sanchez who scored from close range with a shot off the underside of the bar with seven minutes left.

In stoppage time, Lukaku collected a pass out of defence, burst forward, cut inside a defender and drove the ball into the far corner for his 23rd league goal of the season.

Sanchez is on a year-long loan from Manchester United which is set to end after the first week of August when the Serie A season finishes. Inter, who have two games left, moved above Atalanta into second place with 76 points, four behind Juventus who host Sampdoria on Sunday.

Juve, who have three games to play, will wrap up the title if they beat Sampdoria but they have looked shaky recently with one win in five League matches.

Manchester United will not be extending Sanchez and Chris Smalling’s current loan deals with Inter Milan and Roma.

It is understood United are unwilling to extend both players’ loans into next season or have them stay out on loan any further than the current arrangement, and are looking to reach a deal for a permanent transfer. Smalling and Sanchez originally signed on one-year loans expiring in June, but had their stints in Italy extended until the first week of August in order to be able to play out the end of the Serie A season following the shutdown.

Under the current agreement the two players will return to Old Trafford after the last Serie A matchday, scheduled for August 2, meaning that neither will be able to play in the final stages of the Europa League.

Roma and Inter are yet to play their round-of-16 one-legged ties against Sevilla and Getafe respectively, with the original first-leg ties in March being postponed due to the coronavirus pandemic in Italy and Spain. Roma are a possible semi-final opponent for United while Inter may meet Ole Gunnar Solskjaer’s side in the final should they progress through to the decider in Cologne on August 21.

Smalling has scored two goals in 34 appearances for Roma this season, and the club are keen on tying the 30-year-old down to a permanent deal at the Stadio Olimpico.

Related posts:
Basketball News:
Luke Shaw warns Man Utd must be better if they are to repeat Brighton win
Tampa Bay Lightning, Dallas Stars had great playoff runs; what awaits this offseason?
French Open: Rafael Nadal, Serena Williams and Dominic Thiem progress to second round at Roland Garros
MLB News:
NFL Draft 2017, revisited: Why Bears picked Mitchell Trubisky, let Patrick Mahomes and Deshaun Watson fall to Chiefs and Texans
Fantasy Football Buy-Low, Sell-High Stock Watch: Joe Mixon, James Robinson among trade candidates heading into Week 4
Week 4 Fantasy RB Rankings: Must starts, sleepers, potential busts at running back
Recent Posts
This website uses cookies to improve your user experience and to provide you with advertisements that are relevant to your interests. By continuing to browse the site you are agreeing to our use of cookies.Ok