Argentina vs Brazil LIVE: Neymar OUT as Lionel Messi returns in must-win World Cup qualifying clash for the Albiceleste – who are unbeaten in 26 matches!

Without talisman Neymar, Brazil face an Argentina side on their own turf – who have yet to taste defeat in the last 26 matches.

Argentina come into this game on the back of a 1-0 win over Oscar Tabarez’s Uruguay, and now have Lionel Messi back fit and raring to go – much to the objection of Paris Saint-Germain.

Brazil have already qualified for the Qatar World Cup yet Argentina have ground to make up, and currently trail their bitter rivals by six points in the table.

Okay, so just under ten minutes to go until kick-off.

It will be interesting to see how Messi gets on this evening. It’s fair to say he has absolutely not settled in Paris, and the fact he flew out to join up with the national side despite being injured shows where his priorities lie.

Messi has miraculously returned to fitness while out with Argentina, much to the frustration of PSG chief Leonardo.

He’ll be looked upon tonight as the leader and talisman as per, and should look somewhat sharp after getting 15 minutes in the tank against Uruguay.

So, this is how the South American qualification table is poised heading into this one… 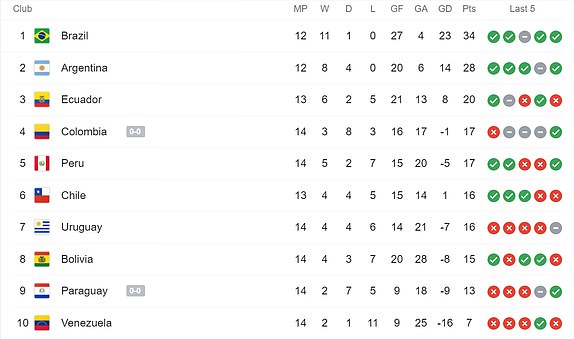 In the mood for a bit of late night World Cup qualification action, featuring two of the best national sides on the planet?

Of course you are.

Brazil – who already have their plane tickets booked to Qatar – face an Argentina side who are desperate to beat them once again, just as they did in the summer.

Neymar is out whereas Messi is very much back.

Oh, and the small matter of Argentina not having lost for 26 matches may have some bearing on this one.