Report and free match highlights as quick-fire second-half goals from Bukayo Saka and Nicolas Pepe make it three wins out of four for Arsenal; David McGoldrick scores fine goal late on, but Sheffield United still without a point in the Premier League and have lost last seven

Second-half goals from Bukayo Saka and Nicolas Pepe in the space of just 190 seconds saw Arsenal beat Sheffield United 2-1 despite a nervy finish at the Emirates on Super Sunday.

There was early controversy as David Luiz escaped punishment despite a tug on Oliver Burke as the Sheffield United man blocked his clearance and looked to run through on goal, while at the other end Aaron Ramsdale did superbly to tip over Pierre-Emerick Aubameyang’s dipping effort from range.

Arsenal were not at their best, but won the game with a quick-fire second-half double. The first came through Saka’s far post header from Hector Bellerin’s cross in the 61st minute, and then substitute Pepe’s pass finish rounded off a fine team move three minutes later. 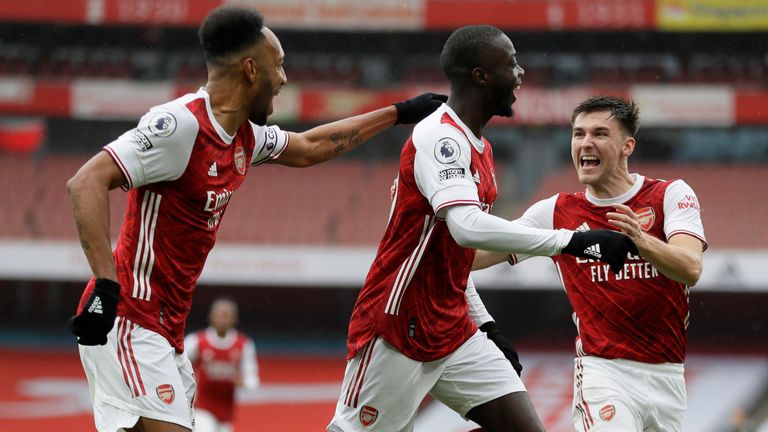 David McGoldrick made for a nervy final seven minutes with a brilliant curling effort from outside the box – the Blades’ first goal of the season – but Arsenal just held on for their third win in four games, while the result leaves Sheffield United without a point in four Premier League games going into the international break.

Man of the match: Bukayo Saka

Arsenal were sluggish in the first half as Sheffield United’s gameplan worked, and the hosts could have been down to 10 men after last man Luiz tugged Burke. Bernd Leno rushed out to clear the loose ball just ahead of Burke, and Luiz went unpunished by Lee Mason, despite a shirt-pull.

“That is a sending-off,” said Graeme Souness on Sky Sports. “How can you not see that as someone pulling a shirt and not do something about it as a referee?” 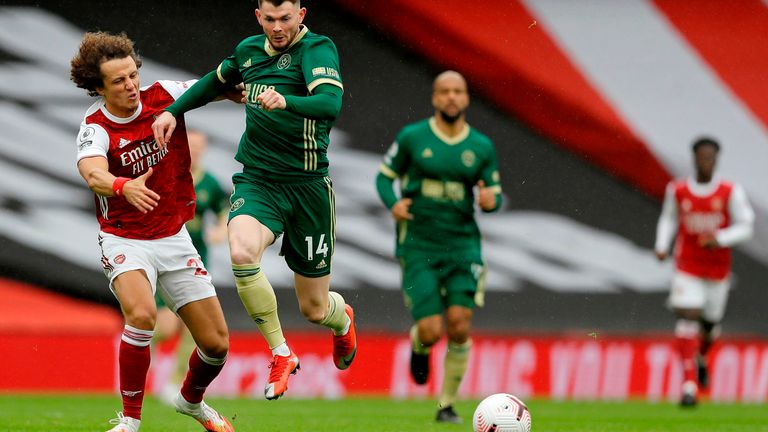 Eddie Nketiah’s tame header from a deep Kieran Tierney cross was the first shot of the game in the 28th minute, the longest wait for a shot in a Premier League game since December last year.

Arsenal were also appealing for a red card as Sander Berge caught Aubameyang on the ankle, but again referee Mason saw nothing worthy of more than a yellow.

Arsenal’s best moment came from a Ramsdale lapse as the goalkeeper’s poor kick was pounced upon by Dani Ceballos; he fed Aubameyang, and his fine dipping effort from 30 yards was wonderfully tipped over by Ramsdale, redeeming himself for the initial error.

Arsenal improved in the second half, and opened the scoring after Bellerin did well to stand up a cross for Saka at the far post, and the youngster capped off a positive week following his England call-up with a measured header into the top corner from close range. It came at the end of an impressive team move involving Pepe, Willian, Mohamed Elneny and Aubameyang, as Arsenal final cut through Sheffield United’s stubborn defence.

Bellerin was again involved in the second, just three minutes later, receiving the ball from Pepe and playing him in superbly on the right flank. Pepe, who had been on the pitch just six minutes, still had a lot to do, and showed a glimpse of what £70m can buy you with a clinical finish into the bottom left corner.

There were 19 passes in the build-up to Arsenal’s second goal, the most before a goal in the Premier League this season. With their 31st shot of the season, Sheffield United got their first goal of the campaign as McGoldrick curled a beauty with his left foot past Leno from range, and despite piling the pressure on – goalkeeper Ramsdale was up for a handful of set pieces late on – Arsenal just held firm for victory.

Arsenal made four changes from the side that lost 3-1 at Liverpool on Monday. Rob Holding, Granit Xhaka, Alexandre Lacazette and Ainsley Maitland-Niles dropped to the bench, replaced by Gabriel, Dani Ceballos, Bukayo Saka and Eddie Nketiah.

Sheffield United made just one change from the 1-0 defeat by Leeds, as John Egan returned from suspension to replace Ethan Ampadu.

This was not vintage Arsenal by any means, and Mikel Arteta’s side looked short of ideas in the first half against a side who had an extra four days to prepare, but their quality showed, while Sheffield United have the international break to reflect on a dismal start, and seven straight Premier League defeats.

Arsenal boss Mikel Arteta: “I’m really pleased. They are a really difficult opponent, as we’ve seen with many moments in the game. It was tricky because they are very organised. We started to attack with more purpose in the second half, we generate many issues and we scored two fantastic goals.”

On Pepe introduction: “We have good options up front. This is what I demand from everyone on the squad that is on the bench, to come and make an impact, and Nicolas did it today, so I am really happy for him as well.

Arsenal go to Manchester City after the international break on October 17, live on Sky Sports Premier League at 5.30pm.

Sheffield United host Fulham on the same day at 3pm in the Premier League.