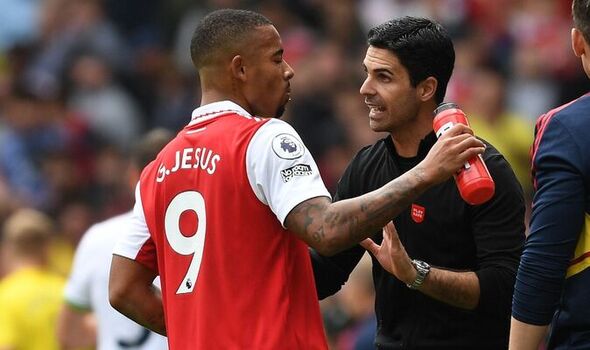 Arsenal boss Mikel Arteta has downplayed any fears Gabriel Jesus has suffered an injury after he missed training ahead of the Europa League clash with Bodo/Glimt. Jesus needed medical treatment in Sunday’s 3-2 win over Liverpool at the weekend after a clash with Kostas Tsimikas.

He managed to carry on after getting treatment, but Arteta decided to bring him off before the end. Jesus looked in some discomfort and appeared to be hobbling when he came off the pitch.

And fears of an injury were sparked even more when he was noticably absent from training on Thursday morning. But Arteta has confirmed that Jesus was left home from the trip to Norway, giving him a rest until the weekend’s game against Leeds.

“We thought that with everything he’s been through in the last few weeks it was better that he stayed at home,” Arteta said. Arsenal can put one foot in the knockout phase of the Europa League with a win over Bodo/Glimt on Thursday.

Jesus has not started any of Arsenal’s Europa League games with Arteta opting to go with Eddie Nketiah in both previous matches. The 23-year-old has had to make do with fleeting substitute appearances in the Premier League so far.

But he’s impressed in Europe with two goals in as many games and will be hoping to add to that tally on Thursday night. Bodo/Glimt play on an artificial pitch and Arteta appears to have some decisions based on the surface.

Arteta said: “A player can get injured in an artificial pitch or a training session. We’ve done everything we can to protect the players.” Martin Odegaard will likely be more accustom to the surface as he returns to his native country.

And the Arsenal captain insists the team can’t use the artificial pitch as an excuse not to get a result on Thursday. “The biggest mistake we can do is to talk too much about the team and the pitch or the weather,” he said.

“It’s still football, still the same rules and we’ll go out to win the same games.”