Pierre-Emerick Aubameyang has been given a clear message by manager Mikel Arteta. Stay at the Emirates and I will make you into an Arsenal legend. The first task of the club in the cold light of the transfer window is to sort out the future of the man whose two goals secured the club’s 14th FA Cup win.

With just 12 months left on his contract, Arteta is keen to tie the 31-year-old to his project to turn the club back into title contenders.

“Scoring goals is the most difficult thing in football, that is for sure,” the Arsenal manager said.

“He makes it look simple – look at the second goal he scored.

“We always had incredible strikers at this football club and Auba deserves to be named and compared with the big names. 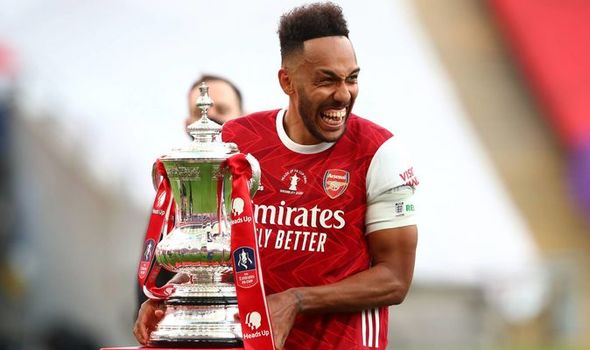 “By winning trophies he will be closer to that and the longer he stays there, hopefully we can have him for longer.”

The Spaniard refused to call out the legends himself but Arsenal fans watching at home know what he is talking about.

Arteta claims some credit for unlocking his potential by getting him to buy into his work ethic. Now the Spaniard has told Aubameyang he wants to build his whole team around him.

“The biggest problem was to convince him to work the way he was working,” Arteta said.

“He was going to get more reward and more respect and our respect would go to admiration.

“Admiration from his team-mates and the people who have been with him and also from the fans.

“The way he is conducting himself on and off the field now, he has got that and has reached that.

“He knows what I think about him, I want to build a squad around him. I want him to stay, it’s about getting the deal done.”