Arsenal captain Pierre-Emerick Aubameyang has confirmed he has been hospitalised with malaria after he was missing from the Gunners’ match day squad for their Europa League quarter final second leg with Slavia Prague. The striker has now revealed he has not been feeling himself in recent weeks upon return from international duty.

Aubameyang clocked up his fair share of miles while on international duty at the end fo March as he returned to Africa for African Cup of Nations qualifiers.

Gabon secured a 3-0 win over DR Congo before being beaten 2-0 by Angola before Aubameyang headed back to north London.

His form has come under scrutiny in recent weeks following Alexandre Lacazette’s fine run of form.

Lacazette missed the 3-0 win over Sheffield United with illness and now he’s confirmed he has been struggling after contracting malaria.

“Hey guys, thanks for all the messages and calls,” he wrote on Instagram. “Unfortunately I contracted Malaria whilst being on national team duty in Gabon a few weeks ago.

“I’ve spent a few days in hospital this week but I’m already feeling much better every day, thanks to the great doctors that detected and treated the virus so quickly.

“I wasn’t really feeling myself the last couple weeks but will be back stronger than ever soon!Will be watching my boys now, huge game for us Let‘s go and get it.”

Arsenal will be sorely missing the quality and experience of their talisman Aubameyang in Prague tonight.

The Gunners know they need to score at least once in the Czech Republic following last week’s disappointing 1-1 draw at home. 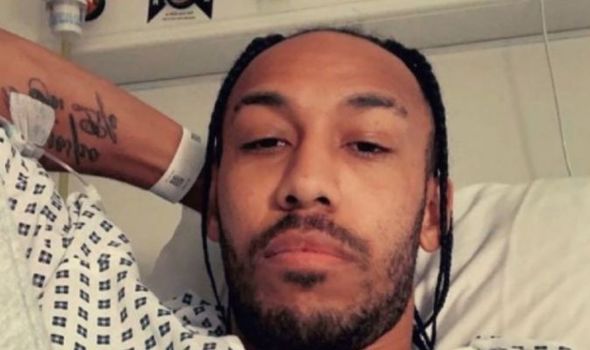 Mikel Arteta offered Arsenal fans hope yesterday that both Aubameyang and Martin Odegaard could be fit for the contest.

When asked if the pair would train on Wednesday, he said: “Depending how they wake up. If they wake up better yes.

“Yesterday none of them could train. Hopefully today it’s a sunnier day so maybe it’s better.”

Before later adding: “Absolutely [hope to have him back]. We’ve shown that in big games big players have to step in and create the magic moments. You need that so let’s hope that we can have them.”

Odegaard has been suffering with discomfort in his ankle and also failed to make the cut.