Serge Gnabry left Arsenal nearly four years ago but still has a soft spot for his old club. The Bayern Munich star was spotted wearing this season’s Gunners away strip in a training video shared by the Bundesliga giants – which caught the attention of Mesut Ozil.

Ozil shared an image of Gnabry sporting the kit on Twitter, writing the caption: “Once a Gunner – always a Gunner?” before tagging Gnabry’s account on the social media site.

The 31-year-old’s message has racked up more than 7,000 retweets and 55,000 likes since being posted on Thursday evening.

And a number of Arsenal fans appeared to get carried away by Ozil’s message to his former club colleague, hoping it is a sign he could be returning to the Emirates Stadium.

“Agent Ozil bringing Serge back to the carpet,” commented a second. 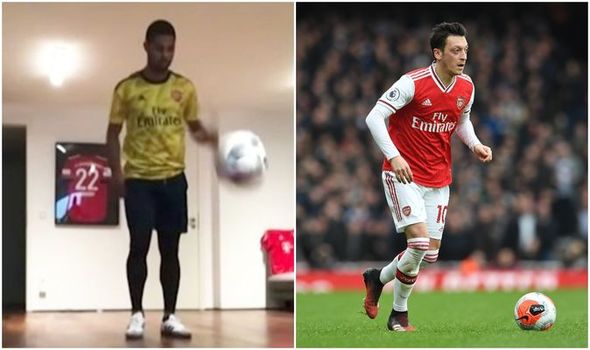 “BRING HIM BACK MESUT,” screamed a third.

While another asked: “What’s happening here then?”

However, a number of opposition fans took to Ozil’s comments to mock the Gooners hoping for Gnabry to return.

While another said: “He’s not coming to Arsenal, in fact he is not leaving Bayern.”

Gnabry has established himself as one of the continent’s most feared wingers since quitting Arsenal for Werder Bremen in a £5million deal in 2016.

Gnabry returned to the Allianz Arena for the 2018/19 season and has since contributed an impressive 31 goals and 20 assists in 75 appearances.

He appears to be the one that got away for Arsenal after failing to make the grade under Arsene Wenger.

“He was unlucky and had a few injuries,” Podolski told FourFourTwo. “He did well in training.

“Off the pitch we spent a lot of time together, going for dinner. But sometimes football is like that, or you find a manager who gives you more confidence.

“Serge can shoot with both feet, and he is powerful and quick – a bit like me, only I don’t have a right foot like him! I’m really pleased that he’s doing well at Bayern.”