Arsenal fans have vented their frustration and confusion as to why David Luiz was shown a red card after the centre-back conceded a penalty late in the first half against Wolves. The Gunners went into the game against Wolves on a good run of form having gone seven games unbeaten in the league.

A win at Molineux would see them climb up to sixth in the table and they got off to a strong start in the game.

Bukayo Saka finished neatly from the edge of the box inside 10 minutes, only for the goal to be ruled out for offside by VAR.

But the Gunners remained in control of the game and eventually found their opener through a brilliant piece of individual skill from Nicolas Pepe.

The £72million record signing skipped past two challenges before firing past Rui Partricio to give the visitors the lead. 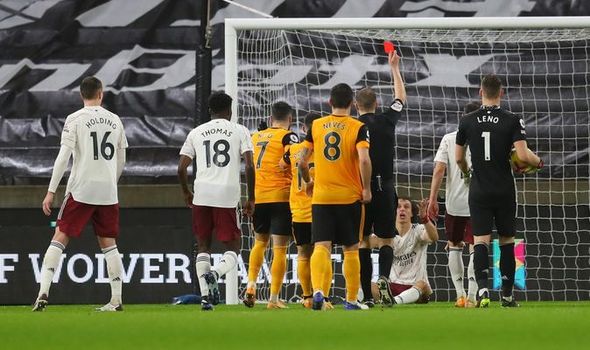 Wolves slowly began to respond and created a few half chances towards the end of the first half.

The Brazilian was chasing back to try and stop Jose, who had been played through one-on-one, and appeared to chop the Wolves forward down.

Paul Tierney immediately pointed to the spot and then didn’t take long before brandishing a red card to Luiz as well.

Previously labelled the ‘triple-punishemt’ rule, players would have automatically been shown a red card if they denied a goalscoring opportunity in the penalty box.

Those rules were relaxed in 2016 though, leading to some Arsenal fans questioning why Luiz was given his marching orders.

One fan tweeted: “It’s obviously a pen but I feel the red is very harsh given that Luiz makes no obvious attempt to take the man out? Looks like he’s just chasing back and trips over his heels.”

Another wrote: “That isn’t a red he isn’t making a challenge it’s accidental, what happened to the rule about being just a pen unless it’s a deliberate foul.”

A third posted: “Luiz actually runs behind the striker cos he can’t catch him, but José’s trailing leg hits him and trips over. It’s a pen but never a red. Sigh.”

A fourth said: “It’s defo a pen but the red is a bit harsh. Stupid of Luiz anyway.”