Ten-man Arsenal hung on for a 0-0 draw at Leeds United in the Premier League after their winger Nicolas Pepe was sent off in the 51st minute on Sunday.

VAR officials spotted that Pepe had headbutted Ezgjan Alioski and referee Anthony Taylor took a quick look at the monitor before brandishing the red card. 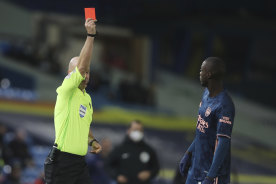 Nicolas Pepe is sent off during Arsenal’s Premier League draw away to Leeds.Credit:Reuters

Marcelo Bielsa's Leeds had been the better side even before the sending off with striker Patrick Bamford twice forcing Arsenal goalkeeper Bernd Leno into action.

Leno did well again to keep out a fierce drive from Stuart Dallas and then substitute Rodrigo crashed a shot against the bar from the edge of the area.

Arsenal, who are without a goal from open play in almost eight hours of football, nearly grabbed a winner, against the run of play, when Hector Bellerin put Bukayo Saka through on goal but he was unable to round Leeds keeper Illan Meslier. 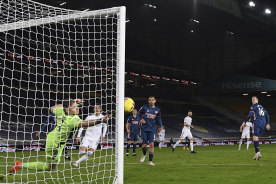 Leeds struck the woodwork twice in the latter stages with Bamford heading against the post and Raphinha also striking the upright deep in stoppage time.

Bielsa was left to rue his team's failure to find the net despite all their pressure and efforts on goal.

Arsenal boss Mikel Arteta reluctantly agreed the draw was an acceptable result for his team, given they played almost half the game a man down.

"It is a point. I am never happy with a draw but considering the circumstance it is one we take and move on," he said.

Asked about Pepe's dismissal, Arteta had a blunt answer: "It is unacceptable. Unacceptable. At this level you cannot do it."

The Gunners are 11th on 13 points from nine games after their first draw of the season with Leeds 14th on 11.

Everton's in-form striker Dominic Calvert-Lewin netted a brace and midfielder Abdoulaye Doucoure scored his first goal for the club as they beat Fulham 3-2 to return to winning ways.

Everton's rise to the top of the table last month delighted supporters but the early optimism had faded somewhat after three straight defeats before the encounter at Craven Cottage. Carlo Ancelotti's side did not wait long to reignite their season. 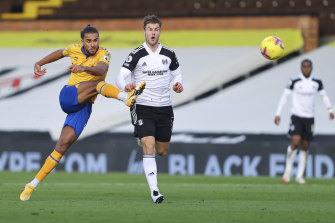 Brazilian forward Richarlison, returning from a three-match ban, picked up a loose ball and ran wide to cross for Calvert-Lewin who tapped in his ninth league goal of the campaign 42 seconds into the contest.

Fulham hit back through Bobby De Cordova-Reid's neat finish on 15 minutes but Everton continued to threaten and were unlucky not go ahead 2-1 as Calvert-Lewin's effort was chalked off for offside and Richarlison's low shot was pushed away.

The visitors carved Fulham open again as Alex Iwobi switched play from the right and James Rodriguez fed Lucas Digne, who produced a first-time ball for Calvert-Lewin to stroke in and top the season's scoring charts.

Digne looked lively in an advanced role and was involved in Everton's third, firing in a cross for Doucoure to head home in the 35th minute and open his Toffees account after joining from Watford in the close season. 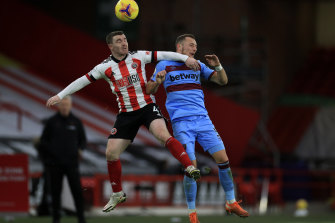 "It was a difficult game, difficult to prepare. It was a good first half … in the second half we lost energy and had difficulties," Ancelotti said.

Fulham pulled one back shortly after Ivan Cavaleiro slipped and missed a penalty in the second half, as substitute Ruben Loftus-Cheek scored via a deflection off Everton defender Yerry Mina to ensure a tight finish.

"There were individual errors but I'm not looking at that," Fulham boss Scott Parker said. "Second half there was a reaction but it shouldn't come from a rollicking at half-time."

Parker conceded his team had a problem with penalties. Fulham have missed five of their last eight penalties in the league and Parker suggested there could be a new face to take up the responsibility from Portugal forward Cavaleiro.

"You couldn't have written it when he slipped and missed," Parker told reporters. "There is no denying we have an issue with penalties. We'll keep working and training to see who is the best to take them.

"We can cause teams problems and be successful but we have deficiencies. It's a young team and we need to drill the message home. We've built a bond and we're doing everything in our power to keep improving."