Meeting a world-famous figure like The Queen can make even the well-recognised Arsenal squad of ‘Invincibles’ slightly jittery. And after being invited to have afternoon tea with Her Royal Highness 15 years ago, it is fair to say the iconic Arsene Wenger felt the nerves in his brief chat with the monarch by cracking a risky joke.

Footage has resurfaced of Arsenal’s visit to see The Queen at Buckingham Palace in 2007 after she was forced to withdraw from opening the newly-built Emirates Stadium.

And in an amusing exchange, Wenger made a risky move by cracking an awkward joke about the club’s badge. Arsenal’s emblem features a cannon, related to their nickname of The Gunners, and without any prompting the Frenchman made a wisecrack about the cannon which some may have viewed as a risky move.

After receiving a model of the cannon as a gift, The Queen can be seen inspecting her silver model when Wenger steps in and points out:“It’s not to incite you to make war!” Fortunately, she saw the funny side of Wenger’s cheeky remark. 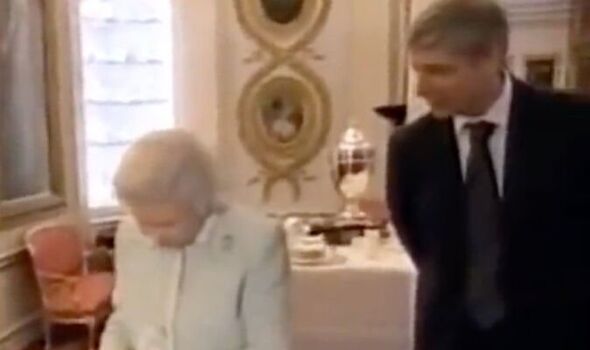 The footage had been posted on social media in remembrance of Queen Elizabeth II, who passed away peacefully on September 8, 2022 at the age of 96.

She was Britain’s longest-reigning monarch having been on the throne since 1952 and celebrated her Platinum Jubilee in June after 70 years of reigning as the UK’s Head of State.

Over the years, The Queen met hundreds of athletes and knighted her fair share of worthy sports heroes.

But receiving a visit from the Arsenal squad was perhaps one of her fonder memories as former midfielder Cesc Fabregas claimed to have been told she had been an Arsenal fan and “definitely knew who I was”. 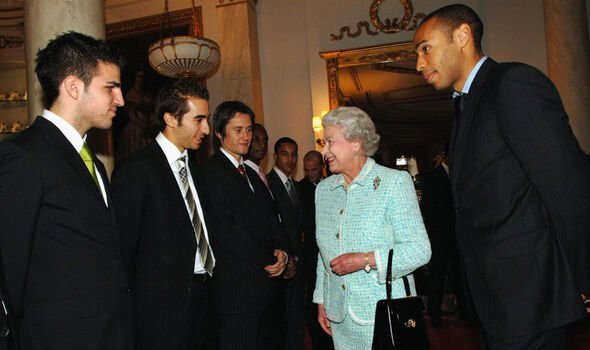 So it is perhaps no surprise that she saw it fit to invite her apparent favourite football team to meet her and discuss their run to the Champions League final in 2006.

Wenger took his squad of heroes for a tour and they were each introduced to The Queen by star striker Thierry Henry as they suited up for the occasion.

At one stage, goalkeeper Manuel Almunia is seen sipping on a cup of tea and remarking “it had to be done” due to the special occasion, despite not liking the taste, while Henry said “words could not describe” how he felt meeting The Queen. Emmanuel Eboue even made her laugh with one of his own jokes.

Wenger did make a slightly more light-hearted comment about the size of Buckingham Palace, quipping: “It’s quite big, could play a good football match in here!” And while they never got to kick a ball about, they will go down as the only football team to have had the honour of being catered for by The Queen in her royal palace.