Arsenal news LIVE updates: All the latest news and transfer gossip from the Emirates Stadium

Arsenal boss Mikel Arteta is considering a swoop for Real Madrid flop Luka Jovic, according to the Daily Star.

The Serbia international joined Los Blancos for £55million from Eintracht Frankfurt last summer but has fallen behind Karim Benzema and Mariano in the pecking order.

Jovic has been earmarked as a replacement for Alexandre Lacazette because he is a different style of player, capable of leading the line as a traditional target man. 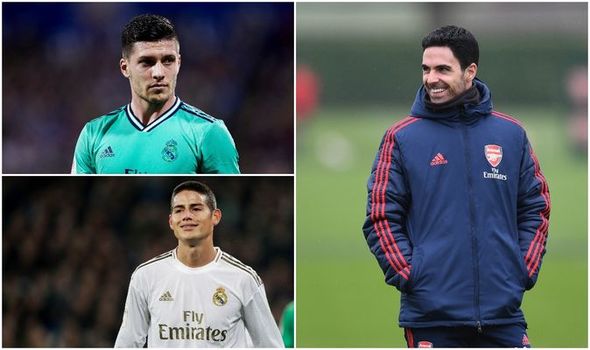 Arsenal could raid the Bernabeu for a second player in the form of James Rodriguez.

According to MARCA, the Gunners remain interested in the Colombia international, who had no appetite for a move to the Premier League last summer.

It is claimed Rodriguez is running out of options, however, and is now warming to the prospect of heading to England.

Carlo Ancelotti was interested in signing Rodriguez for Napoli last summer but has not joined the race at current club Everton.

It appears that raiding La Liga is the plan for Arsenal and Arteta.

According to Sky Sports, the Gunners head coach is looking to make signings from his native country in the next transfer window.

Valencia midfielder Carlos Soler has emerged as a target for Arteta.

He is under contract at the Mestalla until the summer of 2023 so Emirates Stadium chiefs will have to raid their transfer kitty.