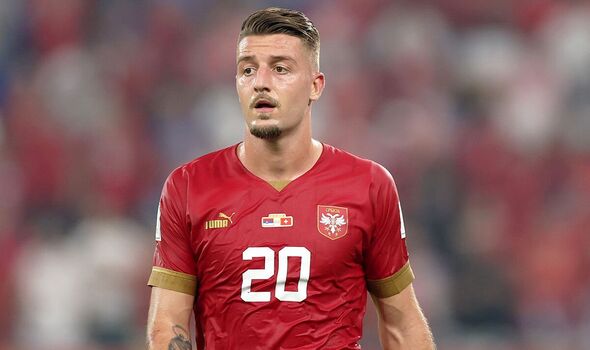 Arsenal transfer target Sergej Milinkovic-Savic is now open to joining the Gunners, according to reports. The Lazio midfielder is claimed to have changed his mind on a potential move to the Emirates after interest earlier this year.

Milinkovic-Savic has long been linked with a move to the Premier League. Manchester United and Chelsea are among the English sides to have reportedly shown interest in the player in the past.

But Arsenal are now the club most linked with his signature on these shores. The 27-year-old has just over 18 months remaining on his contract at Lazio.

And it appears something will have to give soon on his future, whether that is to sign a new deal or find a new club. Italian football journalist Giulio Cardone has provided a major update on a potential move to Arsenal.

He claims the north Londoners attempted to sign Milinkovic-Savic in the summer but the player was not keen. However, he is now open to the transfer following Arsenal’s strong start to the season, where they sit five points clear at the top of the Premier League.

Cardone says Milinkovic-Savic would consider a move if a fair proposal was put on the table. His agent, and former Chelsea striker, Mateja Kezman is scouring Europe for offers for his client.

Cardone suggests a deal may not happen until the summer for Milinkovic-Savic. Speaking to Italian radio station Radiosei, he said: “Arsenal on Milinkovic? The news is that the player has changed his opinion on the English club which already tried to approach him last summer. If a fair proposal were to arrive this time, he would consider it.

“Today the Gunners are dominating the Premier League, they will go to the Champions League, they have started a fascinating project, they have acquired a different appeal. Agent Kezman has been probing various clubs for some time to then bring offers to Lazio.

“In the summer he had garnered serious interest from the London club and Newcastle. Situations declined, but things could change next summer. It will be an important push and pull.”

Milinkovic-Savic joined Lazio from Belgian side Genk in 2015. He has made over 300 appearances in all competitions for the Serie A side, scoring 56 goals.

He has won 39 caps for his country Serbia since his debut in 2017. He was part of the World Cup in Qatar, where his side failed to make it out of Group G.