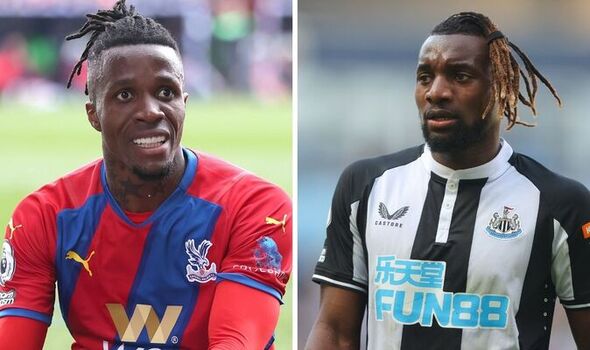 Arsenal endured a torrid season last year but the new signings have helped propel them back into the top four. With just two games remaining, Arsenal are favourites to finish in the Champions League places ahead of Tottenham.

And securing European football for next year could be crucial for what they want to do in the summer transfer window. At least one central striker is expected to join with both Eddie Nketiah and Alexandre Lacazette out of contract this summer.

Gabriel Jesus appears to be the top target with the Manchester City striker’s agent admitting this week that “we like the project” at Arsenal. Raheem Sterling is also being touted as an option to bolster Arsenal’s frontline with City yet to agree to an extension on his current contract.

But Petit wants to see Arsenal completely reshape their attacking options with a host of signings this summer. The former France international has named both Saint-Maximin and Zaha as two options he’d like to see move to the Emirates.

“I’ve heard big names as well, Jesus, Sterling, I really like Zaha, or even someone like Saint-Maximin from Newcastle,” he said. “Martinelli is a very good player, just like Saka, but when they get injured, who’s going to play on the left and right?

“There are no options, they need at least four players, at least two up front.”

Arteta recently committed his long-term future to Arsenal with the Gunners hopeful they have the right man in place to take them to the next step. The Spaniard knows he needs to bolster his squad with European football coming next season.

And he admitted last month that Arsenal will make plenty of signings in the summer to meet his targets.

“The Champions League and the Europa League both require a much larger squad because the amount of games is much bigger,” Arteta said. “If we can afford it financially and we don’t have to do the turnaround in the squad that we’ve had to, what I want is 22 outfield players and three goalkeepers.

“A lot of things have to be put in place and that takes time, so I am expecting a busy summer.”