It was a result that finally put Arsenal above Tottenham Hotspur on goal difference, but that is just one other reason why so many early-season numbers – not least the very scoreline in this match – are so illusory. The real story of this game was one of huge gaps. That was in the Spurs defence, right throughout their team, in the emptying away end and, above all, between the ambitions of these teams. It should have applied to the scoreline, because this was a 3-1 that really had the feel of a 6-0.

It was that bad for Spurs, that exhilarating for Arsenal. Mikel Arteta won’t be so bothered by the image on the scoreboard because he will have been so pleased with the image of his team. This, he can rightly argue, was what he has long idealised. This is supposed to be the point of it all, an effervescent and exquisitely efficient display. The pertinent question is whether they can sustain it against Brighton and Hove Albion next week.

The big question for Spurs is whether that should be a game they look to for other reasons. Graham Potter was a manager they looked at in that long search, before eventually settling on Nuno Espirito Santo. They must now seriously start to consider the logic of that, and whether this is worth persisting with. Daniel Levy must now take considerable blame for how much Spurs have lost their way, especially given the vision of a manager he articulated in the summer. “Free-flowing, attacking and entertaining” football were all described, but Nuno has never been responsible for any of that. The only solace was the idea of an organised defence. But that’s all it was here. An idea, a concept, a thought.

The reality was a shambles. He couldn’t even offer his supposed staple.

The two clubs now suddenly feel like they are going in completely different directions. The players very definitely were.

The scale of the defeat was made all the more pronounced by the feel of the day, where Arsenal’s ruthlessness stood in such contrast to Spurs’ cluelessness. One team was so alert, one team was all over the place.

There were so many moments when Spurs’ players were literally working out where to position themselves, only for an Arsenal to just race past them to punish them in brutal fashion.

This was most vivid for the opening goal, that set the tone, the pace and pretty much everything else on the day.

Bukayo Saka was so easily able to weave his way into the Arsenal box, before so simply playing the ball back for Smith Rowe. There was barely a defender near him let alone a challenge, as the playmaker simply passed the ball into the net. 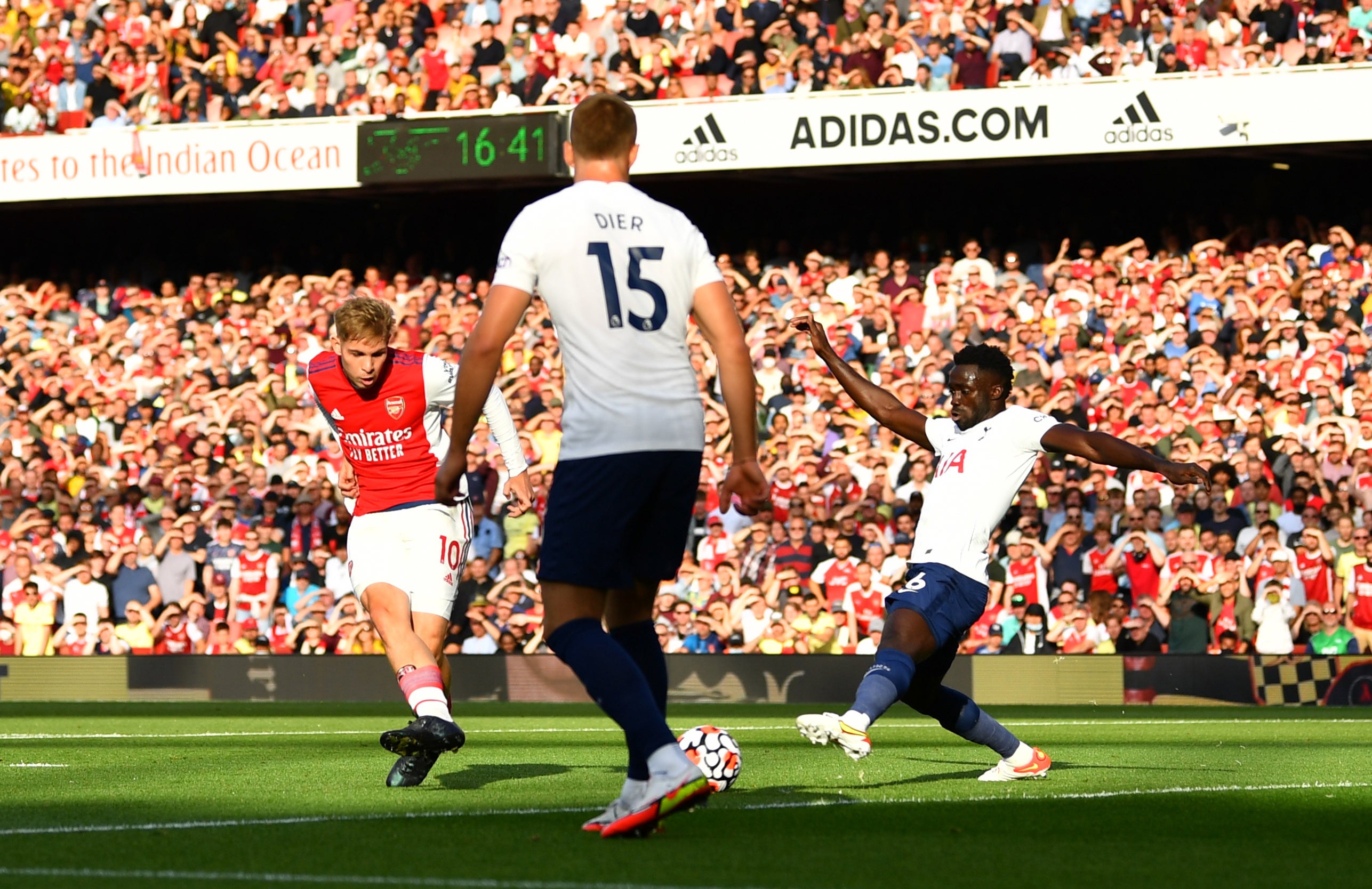 That was bad but was at least close to Spurs’ own area.

What was so damning about the next two was that it was Tottenham possession at the edge of the other box was merely the set-up for another searing Arsenal attack. They twice won the ball so easily, but scored so brutally.

The second goal owed most to the thrust of the effervescent Smith Rowe. He was already bursting forward as Kieran Tierney played the ball up to Aubameyang, and was in prime position to collect as the captain flicked it on. Aubameyang then peeled off in the sort of fluid manner we have seen from some of Arsenal’s best teams, and was there to finish as Smith Rowe swept the ball back.

Thierry Henry, in the stands with Spotify founder Daniel Ek and responsible for so many similar goals, was loving that. The Arsenal crowd were loving it. The atmosphere was deafening.

The scoreline was soon definitive.

And this time, it must be said, much of it was owed to Kane. It was almost a microcosm of the match, Spurs as hapless as Arsenal were ferocious. Kane lost the ball at the edge of the box, and then raced back to try and make up for his error, he only ended up committing another, as basically tackled the ball back into Saka’s path. The forward was left with an easy finish.

It was another of those days where you would actually have doubted whether Kane would be capable of similar right now. He was presented with an easy chance halfway through the second half, only to lift the finish and put it wide.

Kane’s overall record has actually been reasonable of late, if you take in England and the secondary caps, but it’s by now impossible to ignore the evidence of so many unconvincing displays. The uncertainty of the summer seems to have sapped the decisiveness of his own game, at the very least.

He wasn’t the only Spurs player just looking dreadful, it must be said. The effect seemed to go right through the whole side.

It was, naturally, the exact opposite with Arsenal. It was one of those days when everyone wanted the ball, and everyone looked so good on it.

While Smith Rowe was probably their best player on the day, Thomas Partey offered perhaps his best performance at the club, as he really looked like the midfielder Arsenal had such hopes for when they signed him last summer. Takehiro Tomiyasu was again immense but then you could pretty much go through the whole team.

They were regularly going through the Spurs team. Son Heung-Min’s goal did spark a late rally, particularly as Granit Xhaka went off injured from the same move, but it didn’t bring any anxiety or nerves from Arsenal.

They knew they were just much better.

The table doesn’t say that yet. Everything else screams it, as loudly as the cheer that greeted this fine 3-1 win.