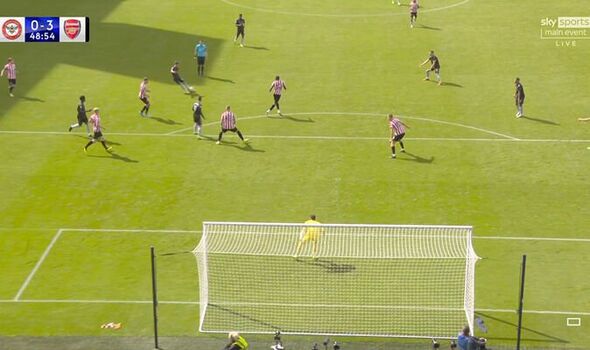 Fabio Vieira has left Arsenal fans stunned by scoring a superb goal on his full Premier League debut. The attacking midfielder has had to wait for his chance but defintitely took it against Brentford on Sunday.

With Arsenal leading 2-0, Vieira all but put the game to bed shortly after half-time. The £34million signing let fly from 25 yards and saw his effort beat David Raya and go in off the right-hand post.

With Martin Odegaard absent through injury, Vieira was given his first league start. He showed a glimpse of his quality when he came off the bench in the 3-1 loss at Manchester United, as well as the 2-1 Europa League win at FC Zurich.

But with injury ruling him out of pre-season and the early weeks of the season, his arrival had gone somewhat under the radar. Arsenal were doing fine without Vieira but he now looks like a secret weapon that can add even more quality to Mikel Arteta’s side as they push to finish in the Premier League top four.

William Saliba opened the scoring for Arsenal on Sunday. He headed home his second goal in a Gunners shirt from a Bukayo Saka corner.

Gabriel Jesus then doubled his side’s advantage with his first goal away from home in Arsenal colours. The Brazilian got on the end of a fine Granit Xhaka cross to head past Raya.

Speaking recently, Arteta explained how he wanted to sign Vieira soon after he first saw him play for Porto. The Spaniard says Vieira’s versatility played a big part in the club’s pursuit of him.

“Straight away, I was convinced that he was a player who can help us go to the next level and that he had the right personality and character to play for our club. It’s a shame that we detected an injury when we were doing the medical.

“He had no pre-season and everything has been delayed, but hopefully you’re going to see a lot more of him in the next few weeks, and I’m sure that you’ll enjoy it.”

For the latest news and breaking news visit: express.co.uk/sport