Former Arsenal manager Arsene Wenger has revealed his ‘admiration’ for Queen Elizabeth II following her death at Balmoral on Thursday.

The Queen peacefully passed away aged 96 bringing an end to her 70-year reign over the country, which is the longest-term served by a monarch in the UK’s history.

Tributes for the Queen have flooded in from the world of football with this weekend’s fixtures have been postponed and figures such as England managers Gareth Southgate and Sarina Wiegman making their own tributes.

The former Arsenal boss, however, revealed what he thought of the Queen as he met her on more than one occasion.

One of the times he met Her Majesty was on a visit to Buckingham Palace in 2006 for afternoon tea. The Queen had meant to cut the ribbon for the unveiling of the newly constructed Emirates Stadium, but she invited the squad to the palace as she was unable to attend.

He wrote on Instagram: ‘I arrived in England almost 26 years ago, in October 1996. During that time, it was an honour to meet Her Majesty Queen Elizabeth II twice. Once at Buckingham Palace, and once at Windsor. 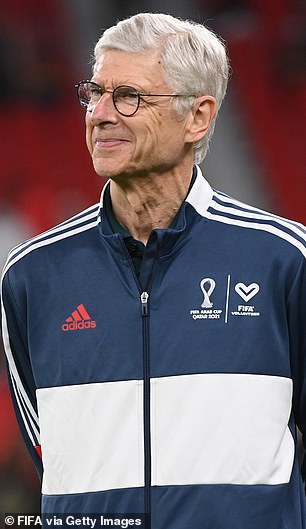 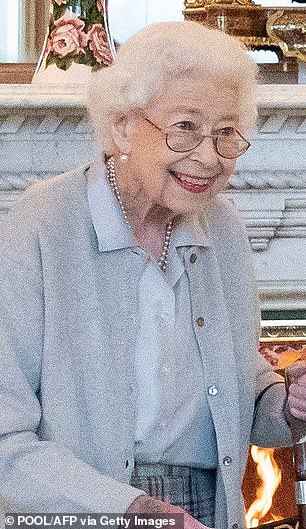 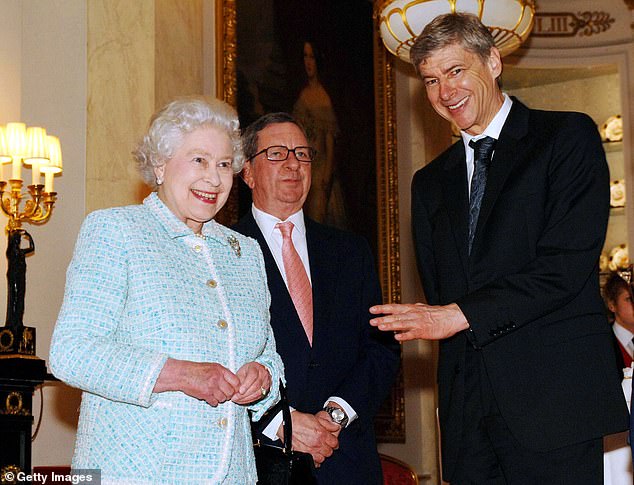 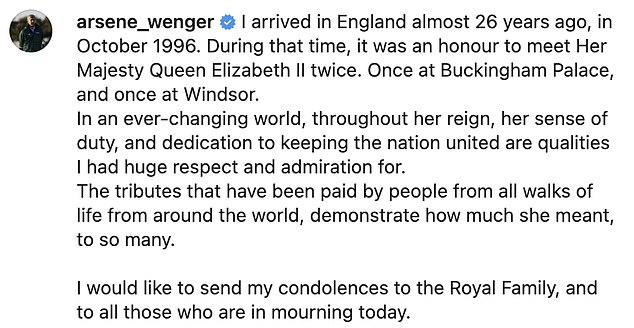 ‘In an ever-changing world, throughout her reign, her sense of duty, and dedication to keeping the nation united are qualities I had huge respect and admiration for.

‘The tributes that have been paid by people from all walks of life from around the world, demonstrate how much she meant, to so many. I would like to send my condolences to the Royal Family, and to all those who are in mourning today.’

Wenger was in charge of the Gunners from 1996 to 2018, winning the Premier League three times and the FA Cup on seven occasions.

The England men’s manager Southgate also paid tribute to Her Majesty, saying: ‘My thoughts today are with His Majesty King Charles III, the FA President HRH The Duke of Cambridge and the Royal Family. 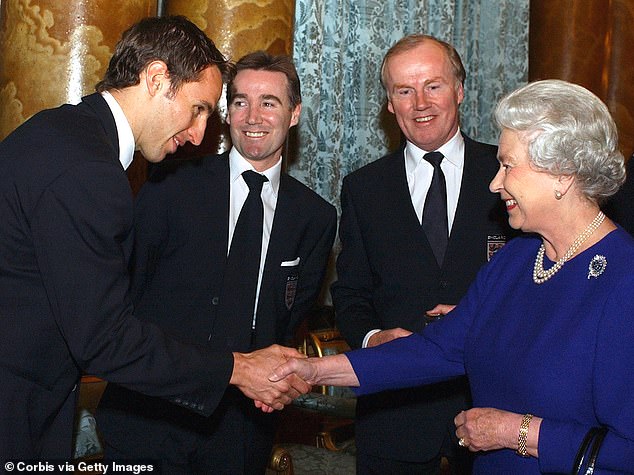 ‘In remembering and celebrating the life of Her Majesty The Queen, we are also acknowledging her remarkable leadership and lifetime of dignified service.

‘She showed the world what it is to be British. Her values, her dignity, her resilience were an exemplar to us all and she has provided us with stability and reassurance in the best and also most difficult of times. I was proud to have her as our patron and to sing God Save The Queen before every match.

‘The team will have the chance to pay our respects at our fixture with Germany later this month. An occasion that will, of course, bring to mind the World Cup final in 1966 and the moment when Her Majesty handed the Jules Rimet trophy to Bobby Moore. As Wembley and the country falls silent, I will think of that and her 70 years of impeccable duty.’ 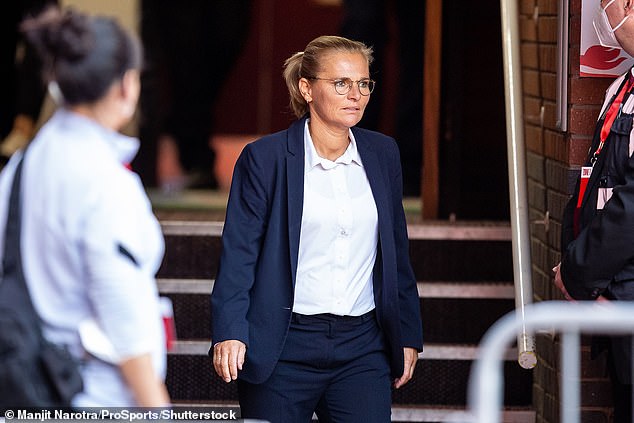 England women’s manager Wiegman added: ‘I just wanted to join the many millions of people across the world to celebrate her life and mourn her passing. My homeland has always had a great deal of respect, admiration and love for her and I know that is a feeling not unique to the Netherlands but across the entire world.

‘Developing my connection with England strengthened my bond to Her Majesty. I could feel the love the public felt for her, a mother figure for people to seek stability and peace from in uncertain times.

‘The national anthem sung with such respect by my players and staff, served as a reminder of what she meant to the country. The words ‘send her victorious’ a line written on our shirts, but was also in our hearts.’

The Premier League have announced that all of this weekend’s matches have been postponed to honour Queen Elizabeth II following her death at the age of 96 on Thursday.

The FA confirmed all football across the country would also be called off, including the EFL and opening games of the new WSL season, as well as matches in the Barclay’s Women’s Championship, Women’s FA Cup and the FA Trophy.

The National League has also cancelled their programme of fixtures for Saturday and Sunday across steps one to six and grassroots football matches in England have also been postponed to mark the death of the Queen.

The Government earlier advised that no sporting events should go ahead this weekend – or on the day of the Queen’s funeral – but left the final decision up to the individual organisations.

The Scottish FA, Scottish Professional Football League, Scottish Women’s Premier League and Highland & Lowland Leagues have agreed that all professional football matches will be postponed this weekend as a mark of respect.

FA Wales have announced that games from the 9th to the 12th of September have been postponed.

The Irish FA has announced that all football in Northern Ireland scheduled for this weekend will not take place.

All of the Premier League 2 fixtures have been cancelled, as well as the Championship match between Burnley and Norwich.

The England and Wales Cricket Board announced on Friday that all cricket would resume on Saturday – including England’s Test against South Africa and England Women’s T20 match against India.

Bristol Bears against Bath Rugby has been postponed from Friday evening to a 5.30pm kick-off on Saturday, following the decision of the Premiership board. The rest of the Saturday Premiership Rugby matches will go ahead.

The RFL postponed Friday’s Betfred Championship fixture between Sheffield Eagles and Dewsbury Rams, but the first Super League elimination play-off between Catalans Dragons and Leeds will go ahead as it is taking place in Perpignan, France.

Further announcements about the weekend’s fixtures at all levels were set to be made ‘as soon as possible’, the governing body said.

However, organisers later revealed they are planning to restart at Wentworth this weekend, awaiting guidance from Buckingham Palace.

The British Boxing Board of Control (BBBofC) stated that all fights on Friday would not go ahead as planned.

The undisputed middleweight showdown between Claressa Shields and Savannah Marshall at the 02 Arena has been postponed until October 15.

The US Open held a brief tribute to the Queen during the women’s semi-finals on Thursday night in New York. With Brits Joe Salisbury and Neal Skupski on either side of the net for the men’s double’s final on Friday, the pair are expected to wear black armbands to mark the Queen’s passing.

Horse racing was a much loved passion of the Queen. Events were cancelled for Friday and Saturday, while evening cards at Southwell and Chelmsford on Thursday were abandoned after the news of her death was confirmed around 6.30pm.

On Sunday, racing returns, led with the St Leger in a revised nine-race programme at Doncaster racecourse.

Sunday’s card at Chepstow in Wales will also proceed as normal, but Musselburgh in Scotland has been cancelled because the Queen’s body will be lying in rest in Edinburgh.

The Queen’s horse King’s Lynn has not been declared for the Al Basti Equiworld, Dubai Flying Five Stakes at the Curragh, Ireland, on Sunday, after being initially entered.

The Great North Run, the world’s largest half-marathon, will go ahead on Sunday. Organisers cancelled its 5k sister event on Friday.

Richmond RUN-FEST has been postponed, because their route would take runners through two locations owned in part by Historic Royal Palaces and a floral tribute to Elizabeth in the Royal Borough’s Old Deer Park.

Premier Sports Elite League Ice Hockey will begin tonight as previously planned, following a board meeting. Fixtures will start with a two-minute silence for the Queen, followed by the playing of the national anthem.