Both sides scored early on in an entertaining and open first half; Ivan Toney got his first Premier League goal, lashing confidently into the top corner inside the box from a recycled corner (7), before club-record signing Emi Buendia got his first Villa goal with a curled finish from the edge of the box (13).

There was a deep dive into the rule book for a disallowed Brentford goal as Vitaly Janelt stole the ball from the hands of Emiliano Martinez at a goal kick, while the visitors showed their defensive capabilities in a less eventful second half that never got going.

The draw leaves Brentford ninth with five points from three games, with Villa a point further back in 11th.

Man of the match: Ivan Toney

How Brentford showed both sides in draw at Villa

Whether Brentford have the quality and depth to stay up is a question for another day, but they again showed variation to their game on Saturday with a bold and open first half, and a more defensively-assured second.

They were rewarded for their intent after seven minutes; Sergi Canos’ low ball back into the box from a half-cleared corner was flicked on neatly by Pontus Jansson, allowing Toney to smash the ball home into the top corner, opening his Premier League account after hitting 31 last season in the Championship.

Tryone Mings was out for Villa, replaced by Axel Tuanzebe, and with both John McGinn and Jacob Ramsey out due to Covid protocols, 17-year-old Carney Chukwuemeka was able to make his first Premier League start.

Matt Targett came back into defence, with Ashley Young moving up to the wing, while Ollie Watkins was in the squad for the first time this season.

Villa equalised just six minutes later as Danny Ings and Anwar El Ghazi combined well on the left, the former feeding Buendia on the edge of the box, and after taking a touch to settle himself, the Argentine found the far corner with a classy finish, ignoring the decoy run of Matt Cash. 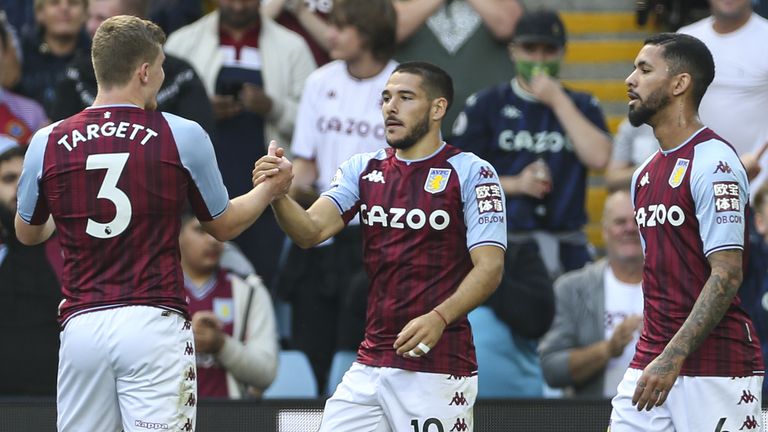 Both sides had chances to score the next goal – Ings’ low shot from a scramble in the box was clawed away well by David Raya, the first shot on target from Villa this season that hadn’t resulted in a goal, while Rico Henry rolled a low effort inches wide at the other end – before a bizarre disallowed goal just before the break.

Law 12 of the Laws of the Game state that “a goalkeeper is considered to be in control of the ball with the hands when the ball is between the hand and any surface”. Because the ball hadn’t touched the ground from Martinez’s hands, Janelt’s cheeky steal couldn’t stand.

After nicking the ball off Martinez as the goalkeeper looked to punt the ball upfield from his hands, Janelt rolled the ball into the empty net, but referee Peter Bankes ruled it out. There was confusion on the pitch and in the stands, but Laws of the Game state in this scenario the goalkeeper is in control of the ball until it touches the ground, which it hadn’t.

The second half was more conservative but altogether messier than the first, with large periods littered with fouls and neither side getting into a rhythm.

Brentford had a penalty shout turned down after Cash looked to have handled in the penalty area under pressure from Bryan Mbeumo, but six bookings in the space of 25 minutes summed up the remainder of the game, and volume levels only rose with discontent towards referee Bankes.

Former Bees forward Ollie Watkins did come on for his first minutes of the season, forcing two saves from Raya late on, while Brentford had another penalty shout turned down as Kourtney Hause made contact with Yoane Wissa, but neither side could complain about the result on balance.

Villa go to Chelsea after the international break on Saturday, September 11 at 5.30pm, live on Sky Sports Premier League, while Brentford host Brighton at 3pm in the Premier League on the same day.