As an acclaimed chef and restauranteur Aitor Elizegi is used to putting together a recipe for success.

The fire still burns inside him when talk turns to gastronomy in the Basque country and his successful restaurants; Txocook, Bascook and Basquery among them.

But when the question is posed as to the secret for Athletic Bilbao’s success in the Copa del Rey he takes a pause, trying to work out the ingredients that have led to Los Leones becoming the second-most successful team in the tournament’s 118-year history. 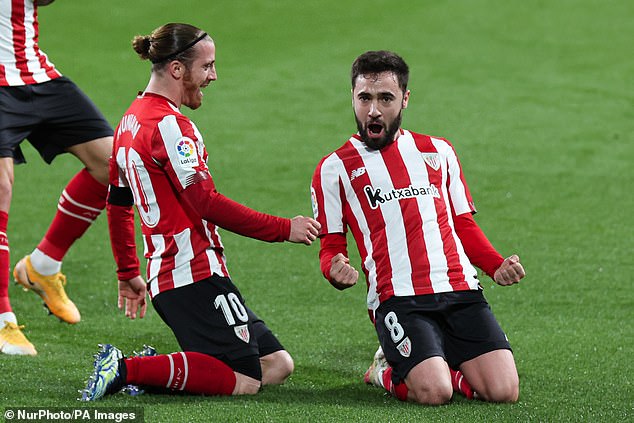 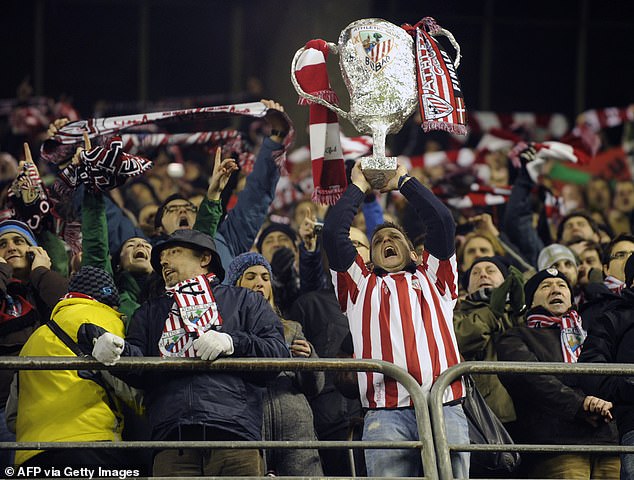 ‘Knockout tournaments work because we have a competitive team DNA,’ Elizegi tells Sportsmail.

‘For our team it is often all or nothing and historically you can see in our records. This is where the players and the team feel comfortable.

‘Sometimes it is heads, sometimes it is tails, but Athletic has always felt very comfortable with a penalty shootout, with long matches, with extra-time.’

As well as cooking up genius in the kitchen his biggest focus in the last three years has been on Athletic Bilbao, having been elected as club president to succeed Josu Urrutia.

Athletic got the first trophy under his presidency earlier this year by defeating Barcelona in the Spanish Super Cup, Inaki Williams scoring the winner in extra-time.

But it is the Copa del Rey, the King’s Cup, where history beckons. Beat Levante at the Estadi Ciutat de València and Athletic will make it two Copa del Rey finals in two weeks.

Last season’s instalment, an all-Basque affair for the first time in Copa del Rey history with Real Sociedad, was postponed on the grounds of the Covid-19 pandemic. It was inconceivable to host such an emotionally-charged game without supporters. That will now take place on April 3.

The opportunity stands for three finals in four months. For Elizegi, a boyhood Athletic fan, this is a chance at history but it’s also far more than a potential influx of silverware.

His mind is cast back to the postponement of last year’s final and the difficulties faced by so many in the Basque region and beyond as Covid-19 gripped tightly across the globe. The joviality in his voice fades for an issue that has weighed heavy on his mind.

Football, he feels, is a beacon of hope for many and that is not lost on Marcelino and his players.

‘2020 has obviously been a year that has had a major effect on everyone,’ he said.

‘We have to now think about the future and one of the things that helps people look to the future is football. In 2021 we believe (we can win), why not? We could win one of these titles and that would send out a message of hope to fans and to our followers. 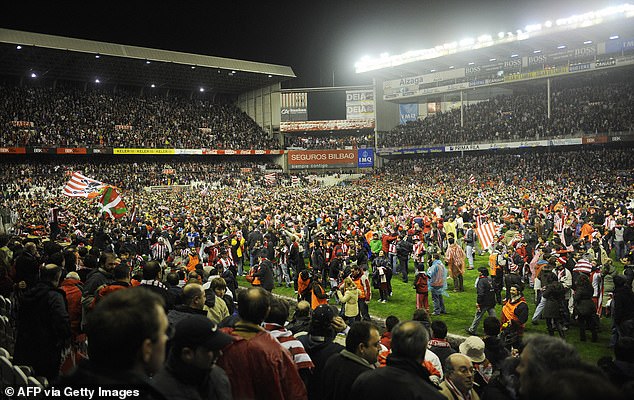 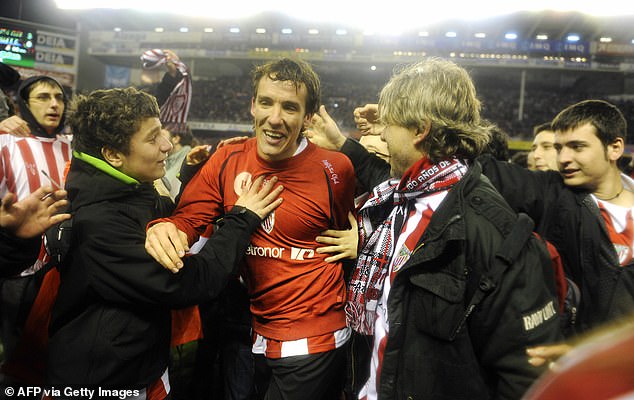 ‘One of the rivals in the final is another Basque team and they have a similar way of looking at football locally. So certainly from a local perspective it is going to be a derby and they are very passionate and exciting events.

‘We are trying to send a message of support, of warmth, of hope to those affected by Covid.

‘We want to tell people it’s worthwhile to live through the world of sport and hope for better hope in 2021.’

History, in the comfort of cup competitions at least, is on their side heading into Thursday’s second leg.

For Levante, who hold a precious away goal after a 1-1 draw at San Mames in Bilbao in the first leg, they are targeting their first ever Copa del Rey final.

‘We’re going to give it everything,’ manager Marcelino said on Wednesday.

‘The team is motivated, in high spirits and determined to win.

‘Winning is all that matters and we will give everything to make that happen.’

For Athletic there have been some incredible memories, fans taking to the San Mames pitch after defeating Sevilla to reach the final in 2008-09. 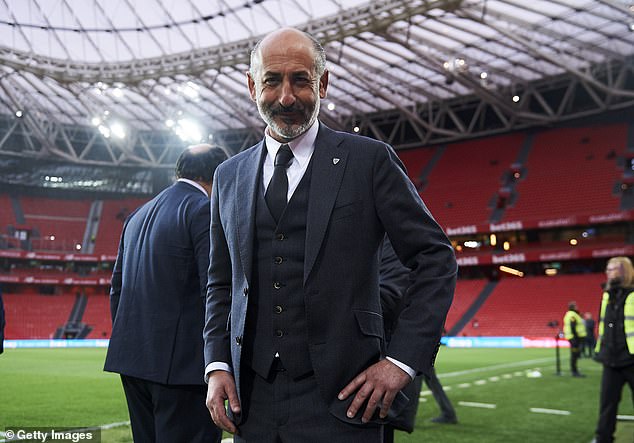 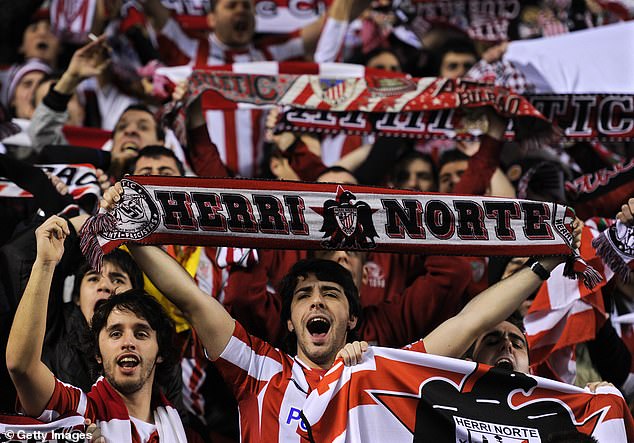 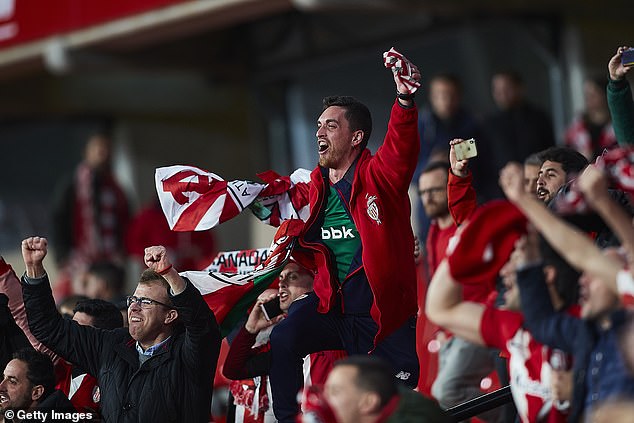 Tears in fans’ eyes as players were mobbed leaving the field, iconic tin-foil Copa del  Rey trophies piercing the night sky. Or the demolition of Mirandes in 2012 to reach the final.

But not since the era of Javier Clemente, the 1983-84 and 1984-85 seasons, have Athletic managed back-to-back Copa finals. Even by their lofty standards something special is cooking up in Bilbao.

Marcelino called up every single first team player to travel for the semi-final second-leg, determined to not leave anyone out.

He knows they are that Goliath to the David in this situation and yet the comfort is there. They may be 10th in LaLiga but it is the Copa del Rey where this club thrives.

Only Barcelona can point to more successes since this competition’s inception.

‘Levante can make history by reaching a final for the first time,’ Marcelino added. ‘But we can also make history, we’re aware of that. 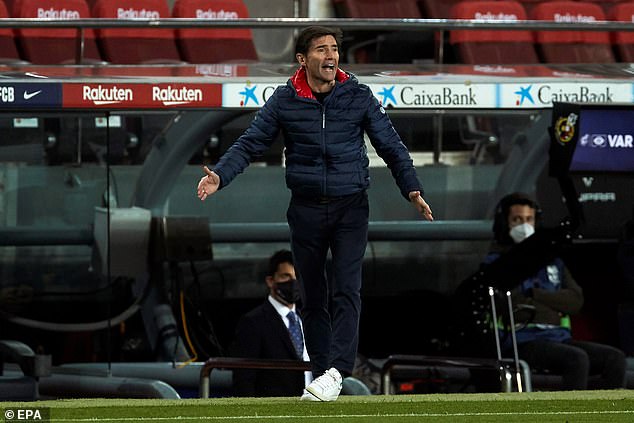 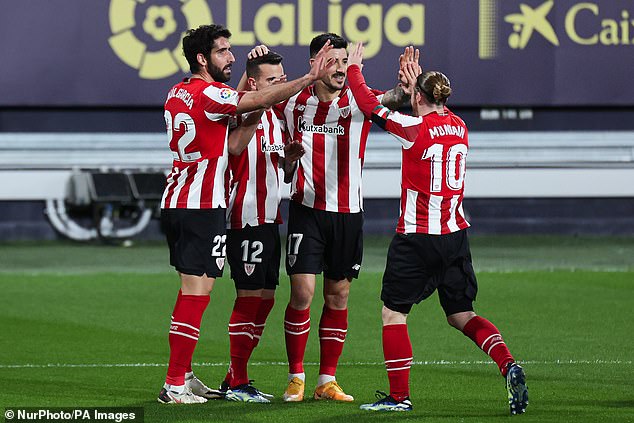 ‘Playing three finals in a year is something that rarely happens, and the team is fully motivated.’

Levante have form on their side, are unbeaten since January and are well versed on Athletic Bilbao having played them twice in recent weeks.

For Elizegi and Marcelino it comes down to three things.

‘Levante are capable of approaching the match in several different ways and doing well, as they have shown in these two previous games,’ Marcelino continued.

‘We have to make sure we read the game well. We won’t be lacking in ambition, personality and character.’

While the recipe for success is still somewhat unclear to Elizegi and the players they know it has worked so far. Having not lifted the trophy since those peak years in the 80s, fans are desperate to get a taste again.

Watch Athletic Bilbao take on Levante live on Thursday at 8pm on LaLigaTV, available from just £6.99 a month via Premier Sports and Amazon Prime Video Channels