One-time Matilda Rhali Dobson enjoyed the perfect farewell from football in every sense.

The two-time W-League grand final winner made the tough decision to walk away from the game at age 28 because her partner, Matt Stonham, is preparing to begin radiotherapy as he fights brain cancer.

Melbourne City won't be playing finals this season so Thursday night’s home clash against Perth Glory was Dobson’s last game in Sky Blue — and she made the most of it.

With scores deadlocked at 0-0 after an hour, Dobson scored the opening goal before City secured a 2-1 win. At full-time Dobson ran to the sidelines to embrace friends and family before finding Matt and giving him a kiss.

As the emotional scenes played out, the commentator explained how Dobson had actually asked Stonham twice to marry her and he’d laughed.

“These are the scenes you love to see in football …” the commentator said. “Hopefully the answer is yes sooner rather than later because she’s the one asking.”

But Matt had a surprise in his pocket for everyone.

To cap off a fairytale night for his 28-year-old sweetheart, Matt dropped down on one knee and proposed.

The crowd erupted, she said yes and the commentator couldn’t believe what had happened.

“Sometimes we call it the commentator’s curse and sometimes we talk things into existence,” he said. “How about that! Congratulations. There’s tears in the crowd. What a moment. Matt Stonham and Rhali Dobson are engaged. What a fantastic moment after the final game of her career. They’re never going to forget tonight.”

The moment was picked up by news websites across the world as football fans everywhere fell for the adorable couple. 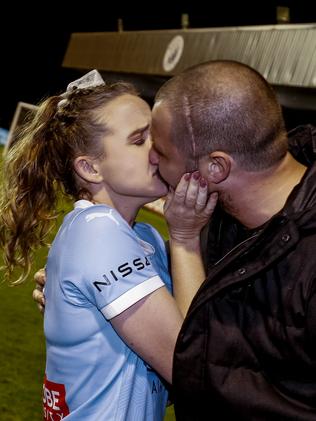 They seal it with a kiss. (Photo by Darrian Traynor/Getty Images)Source:Getty Images Dobson, who was a member of the inaugural Newcastle Jets squad back in 2008 and played one international for her country in 2014, has played more than 100 W-League games.

She won titles with City in 2018 and 2020 but away from football has been dealing with Matt’s life-changing brain tumour diagnosis in 2015.

“I don’t feel like I’m ready to retire but sometimes life makes those choices for you,” she told ESPN. “But with everything going on it’s a decision that has to happen — because it’s bigger than the game.

“Matt and I are very open about everything. He was diagnosed with brain cancer six years ago after a seizure on the soccer field when he was playing.

“He had brain surgery and that was successful and then he elected to stay on just having reviews with oncology after everything went so well the first time. Purely to help out from a research perspective, he’s really good that way.

“He was having a check-up and they noticed a bit more activity in a very small area (of his brain) back in February.

“He underwent secondary, awake brain surgery on March 10, which I was home (in NSW) for.

“Five days after his brain surgery he kicked my backside back down here to Melbourne, told me that I had to finish out the season, that I’ve got unfinished business and it was still normal as always.

“Then we got the news two days after I got back down here to Melbourne that the part that they took out — which they got all of, which is fantastic — had transitioned to a grade III brain tumour.

“So, he now starts aggressive radiotherapy until the end of May and then he’ll start aggressive chemotherapy for 12 months.

“We’ve caught things exceptionally early, he’s on the very positive end of the scale because of his age. He had no other signs or symptoms, it was for him a routine check-up.

“But ultimately, it is still brain cancer so I want us to have the opportunity to have everything life has to offer.

“This is bigger than the sport. He is my absolute world.”

And now the whole world is cheering for both of them.