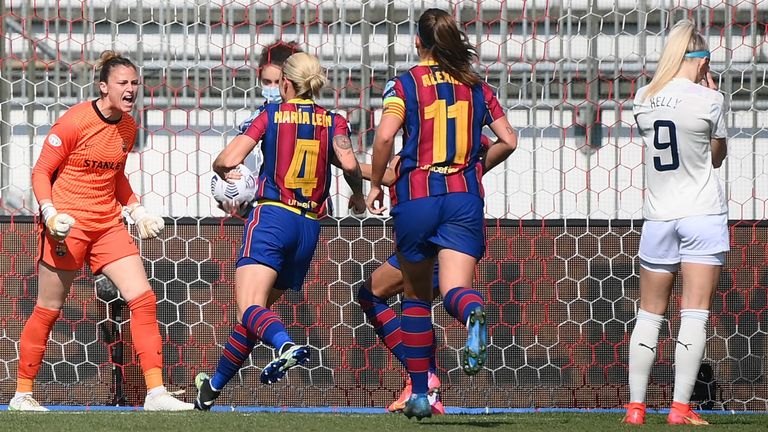 City had goalkeeper Ellie Roebuck to thank for keeping them in the game for much of the first half. The 21-year-old produced a string of superb saves to keep Barcelona from racing into an unassailable early lead, with only former Liverpool and Arsenal striker Asisat Oshoala’s (35) effort from range beating her.

The second half began in dramatic fashion, with Barcelona winning the first penalty, which was scored by Mariona (53). Just over three minutes later, Man City were handed a vital advantage to score an away goal, but Kelly’s effort was saved by Sandra Panos.

The introduction of Jennifer Hermoso midway through the second half was a statement of intent from the designated hosts and sure enough, Barcelona’s top scorer added the third late on. Alexia Putellas’ effort rifled off the post and Hermoso was lurking to slot home her 21st goal of the season.

The result leaves Man City with a mountain to climb in next Wednesday’s second leg at the City Academy. Barcelona will be confident of another clean sheet though, registering their 11th successive shutout in the first-leg victory.

How Barcelona took control of the tie Barcelona had early sights of goal in a dominant first half. The impressive Carole Graham Hansen cut inside, but her effort smacked into the bodies ahead. Oshoala then forced the first of many wonderful saves from Roebuck, with Hansen drifting the loose ball wide of the far post. Roebuck then made a superb leaping save to deny Aitana Bonmarti.

City began to find some joy up front, and carved out a good opening with their first attack. Caroline Weir sent Sam Mewis’ chipped cross goalwards, but Panos was there to save. Lauren Hemp then sent an inviting ball through the area, but Kelly could only send her effort over the crossbar.

Both sides saw their best chances of the half within a minute of one another. Mariona floated a cross into the middle, but Putellas’ strong header went straight at Roebuck. Then, Hemp went on a wonderful run into the area before picking out Ellen White, but the striker’s effort flashed across the face of goal.

Player of the match: Lauren Hemp.

Barcelona finally found the deserved breakthrough in the 35th minute. A free-kick from the right found Putellas in the middle, but she could not divert it goalwards. The loose ball was then played to Oshoala waiting at the top of the area, with her low drive beating Roebuck.

City thought they had netted the reply just before the break. Alex Greenwood delivered a superb free-kick, which an unmarked Mewis slotted home, but the USA international was flagged for offside.

Demi Stokes replaced Esme Morgan at half-time for Man City, but the England left-back gave away a penalty seven minutes later. She swiped at the legs of Oshoala and was booked in the process. Mariona stepped up and despite Roebuck going the right way, the penalty rifled into the back of the net.

Three and a half minutes later, Man City were awarded their own spot-kick. Hemp made another mazy run into the area and was sent over by Mapi Leon. It was a golden chance for City to nab the vital away goal, but Panos made a leaping save to keep put Kelly’s effort. 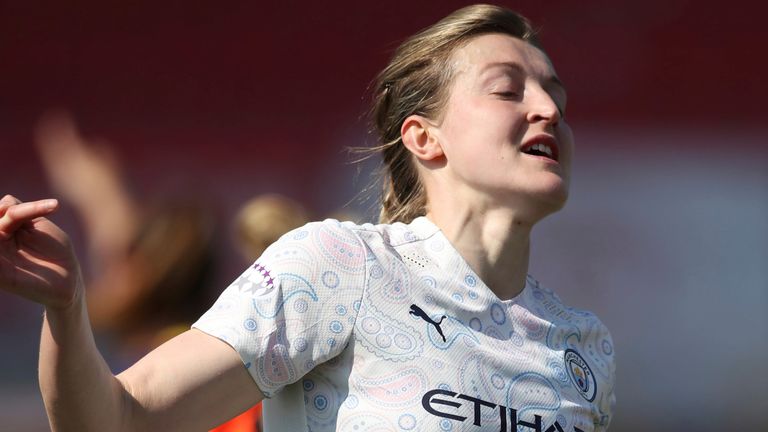 Barcelona continued to control the game for large swathes of the second half, but Man City had their own sights of goal. White sent an effort straight at Panos, with Weir’s skewed header also landing safely into the goalkeeper’s hands.

But Barcelona added their third with four minutes of normal time to play. Hermoso slotted Putellas in down the right of the area, with her effort beating Roebuck but smacked the far post. The loose ball then fell to the in-form Hermoso and with the goal open, easily slotted home.

Player of the match – Lauren Hemp

Although it wasn’t Man City’s best performance, Hemp was incredibly impressive. The Barcelona defence looked a touch nervous when Hemp ran at them and City often created when she did so. More of her team-mates needed to be doing the same next week.

Hemp also made a number of superb crosses from the left wing too and won the penalty. It was a great shame that Kelly’s effort was saved, but City need more of that mentality in the second leg if they have a chance of reaching the semi-finals. 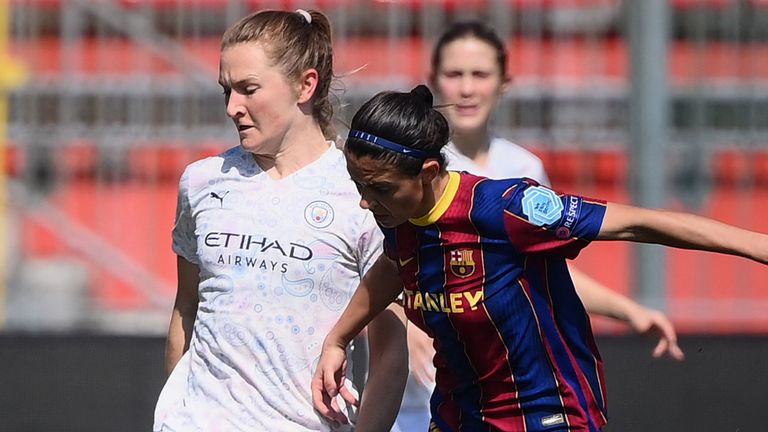 “City will be hugely disappointed. It was a fantastic performance from Barcelona, and we always knew it was going to be a difficult game for Man City.

“When Barca are given an opportunity, they take it, and defensively they are solid.

“City struggled in the first 20-25 minutes, giving the ball away, something we’re not used to seeing from this side.

“City were so much better in the second half, created opportunities, but Barca took theirs and City didn’t. City have got to take heart from the opportunities they created, but it’s a really disappointing result. “They could have easily scored two or three themselves. I just felt first-half they were a little bit wary of Barca’s threat, sat back, and were trying to keep their shape.

“They took the game to Barca in the second half and created those chances, but this is a very good Barcelona side.

“In the latter stages of the Champions League you have to be clinical, something City weren’t in this game.”

Barcelona have an away trip to Sevilla in the Primera Division on Saturday. Man City are at home to Reading in the Women’s Super League on the same day. The two will then meet in the Champions League quarter-final second leg next Wednesday at the City Academy.