Barcelona will sack Quique Setien if his side loses against Bayern Munich tonight, reckons former England international Owen Hargreaves. Setien’s future at Barca is already in serious doubt following a turbulent few months since football returned from the coronavirus lockdown. Real Madrid beat their El Clasico rivals to the La Liga title for the first time since the 2016/17 season.

Setien was only appointed as Barca boss in January following the sacking of Ernesto Valverde.

Legendary former midfielder Xavi was the first choice to replace Valverde but a deal with the 40-year-old fell through.

Barca went into the Champions League quarter-final against Bayern as underdogs.

And Hargreaves believes Setien will be out of a job if Bayern progress and says his team selection was a negative step to start with. 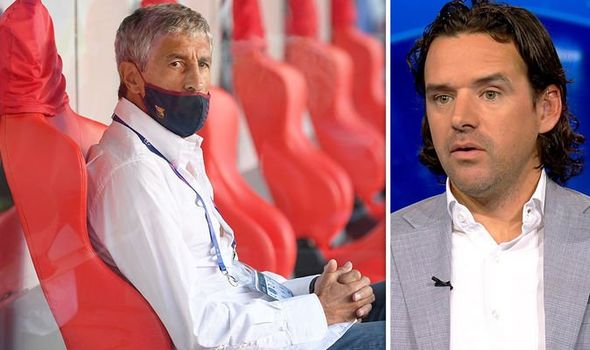 Hargreaves said on BT Sport: “Well I think if he loses he’s going to lose his job today because if you lose I think you lose with [Ivan] Rakitic and [Antoine] Griezmann [in the team], the Barca way – this wouldn’t be the Barca way.

“I think he’s hoping [Lionel] Messi and [Luis] Suarez can get him out of trouble and the rest are just going to play more protective.”

Hargreaves noticed one big thing missing from the Barca team compared to his former side Bayern.

“I was looking at that starting XI and I thought the one thing it lacks is power, speed and power,” he added.

“There’s a lot of beautiful football players, really fabulous players, but you look at Liverpool and what they have, the blend between football and power, pace.

“That Barca team is brilliant if they have the ball and they might not have as much of it as they normally do. It lacks power.

“They’ve spent, what is it, £800m since Neymar left and still they’re reliant on Messi, who came through the youth system there and the older players in the team who were there before that was spent as well,” Ferdinand said.

“They’ve not recruited in terms of spending that money wisely I don’t think going forward.

“But listen, when you’ve got Messi in your team you can make a few mistakes because invariably he’s got them out of trouble.”