Real Madrid’s equalising goal in their Champions League semi-final first leg with Chelsea should have been chalked off.

That is the opinion of a refereeing expert in Spain who feels Zinedine Zidane’s side were fortunate match official Danny Makkelie did not spot what they felt was a foul in the build-up. 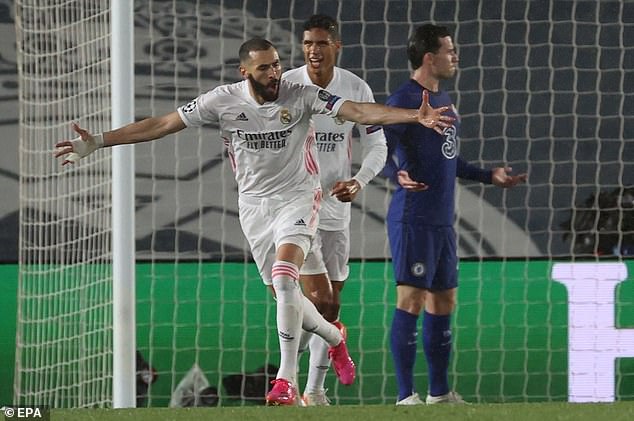 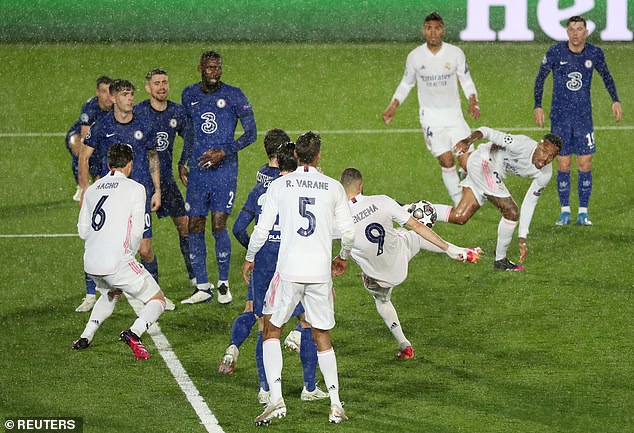 The VAR did not take long to check the goal, appearing to look for an offside infringement, rather than a foul, but no foul-play was judged.

A subsequent poll on Marca’s website saw 48 per cent of voters go against Andujar Oliver’s verdict by insisting it was not a foul by Casemiro.

A short corner was taken by Toni Kroos to team-mate Luka Modric, who in turn picked out Marcelo on the edge of the box.

As part of the routine, Marcelo lofted the ball to Casemiro at the back post and the midfielder muscled his way above Azpilicueta to head across the box.

Azpilicueta buckled under Casemiro’s flight and Eder Militao’s flick on from Casemiro fell to Benzema, who hammered it past a helpless Edouard Mendy. 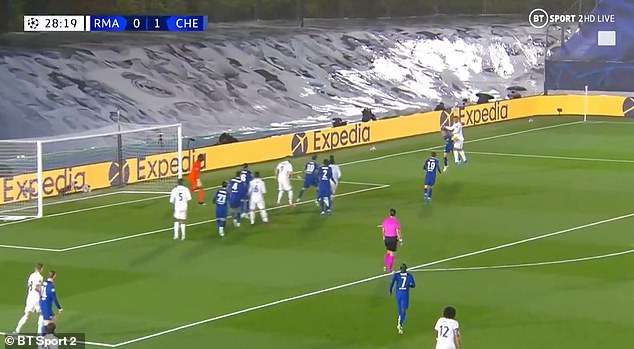 Casemiro (back, right) jumped above Cesar Azpilicueta in what Marca’s refereeing expert believed was a foul on the Chelsea defender in the build-up to Benzema’s equalising goal 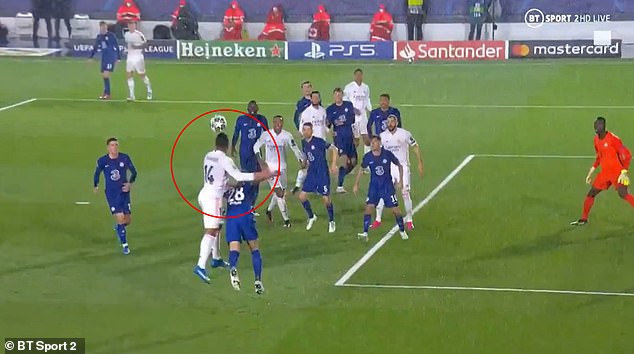 Chelsea’s defenders offered little by way of protest, having earlier grabbed a crucial away goal through Christian Pulisic.

Makkelie came under pressure in the build-up to the match in the Spanish media with growing fears that Real Madrid’s leading role in trying to establish a breakaway European Super League would hurt them in the two legs against Chelsea.

The referee showed a great deal of leniency in treacherous conditions and if Andujar Oliver is to be believed, Real Madrid have Makkelie to thank for not ruling out what could prove to be a crucial goal in the balance of the tie.

For Azpilicueta, he was left to rue Chelsea not making their early dominance count having started so impressively in the Spanish capital.

‘I think we started really well for the first 20-25 minutes, we got the goal and I think we could have scored more,’ he said. 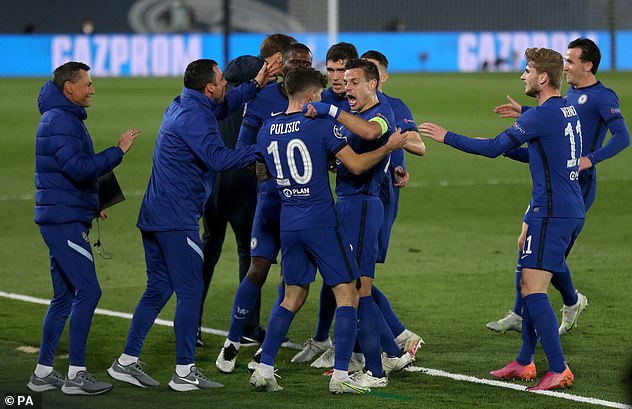 ‘They got back from a set play. We then controlled some parts and suffered in others. It is just the first half, we knew against Real Madrid it would be tough.

‘We started with courage, we had to perform at our best level. The semi-final of a Champions League asks you to play your best. We missed that little last pass where we could choose the best option.

‘I think in the overall analysis we performed well. Benzema scored a great goal, he is a very good striker. He dropped, he got the ball and got that goal. We have to be aware for the next game.

‘We are a whole group where we work hard. We have the chance to win two trophies, so everyone is committed. As a unit I think we are all improving and all growing.’

Next week’s second leg will see Chelsea attempt to qualify for their first Champions League final since the victory over Bayern Munich in the 2012 final.